Intouchables (or Untouchable, in English) was a very pleasant surprise to me for 2012. Considering that I’m not that much into french movies and that Intouchables is on the run to become the most successful movie in France, leaving La Grande Vadrouille (with legendary Louis de Funés) and Bienvenu chez les ‘Chtis (starring french superstar actor Cad Merad) behind, I must say that this flick deserves this award and that I’m extremely happy about it.

But what’s this movie about?

It’s about a quadriplegic aristocrat named Philippe who was injured in a paragliding accident and eventually engages Driss, a young african from the ghetto, as his caretaker. This “combination” might sound perplexed at first, but it’s the very essence of this great movie. I have rarely seen such a “piece of art” that has so much heart and transmits so much hope and warmth to the viewer. 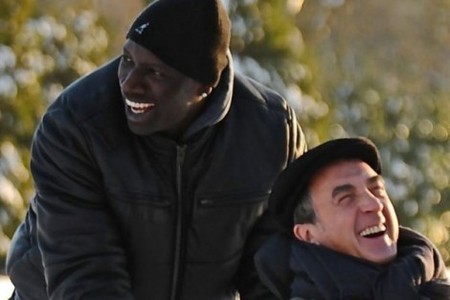 The combination of rich and depressed Philippe (or should I say frustrated, which sounds harsh considering his physical condition) and open-hearted extroverted Driss couldn’t be any more frontal. It’s Beethoven, Wagner and Brahms meeting Kool & The Gang. And yet the constellation works perfectly. After a short practical training at Francois palace (yes, one can say palace, it’s a big ass crib!) both become inseparable mates. Francois teaches Driss how to behave and introduce himself correctly in front of high society; how to look at art and how to interpret abstract artworks. He even manages to motivate Driss to become a painter.

And Driss , for his part, gives Francois his long lost self-confidence back; showing him the joys of life one can have, even with a severe disability. From introducing Francois into smoking marihuana to better withstand his phantom pain; to exotic ear-massages by high-class hookers or how to educate his rebelling daughter the right way, this unconventional life-affirming assistant is the right resource to make Francois feel alive and worth again.

The experience throughout the whole movie is like a big emotional rollercoaster joyride. That’s exactly the strong point of this flick. Being a paraplegic; with absolutely no autonomy is the biggest “punishment” and burden one can bear. But with “Intouchables”, you’ll realize once more that nothing is impossible; independently of the barriers you have to take upon you. When you have the right framework around you, like Francois has; with Driss on his side, you’ll never forget what you’re worth and worthy, no matter what obstacles you’ll have to confront.

Because after all, what matters, is the individual and the dignity that is in each one of us; no matter what one looks like or what obstacles one’s got to overcome.

Honestly, never could a movie bring all this aspects on point as Intouchables did.

There are a few things I did not like that much. For example, making a running gag of manual disimpaction is not really that funny, not for the patient nor for the caretaker, and yes; I do know what I’m talking about.

Furthermore I do ask myself how Francois could keep his balance when sitting inside his Maseratti as he could not move his limbs at all; eventhough Driss’ argument that only horses or cattle are transported in the back of a transporter sounds like a valid argument to me. But I guess that I’m splitting hairs right now, as both aforementioned points did not disturb the overall visual experience at all.

Intouchables left me very positively impressed and I have to say that it already is one of my all time favorites. Most definitely a must watch!