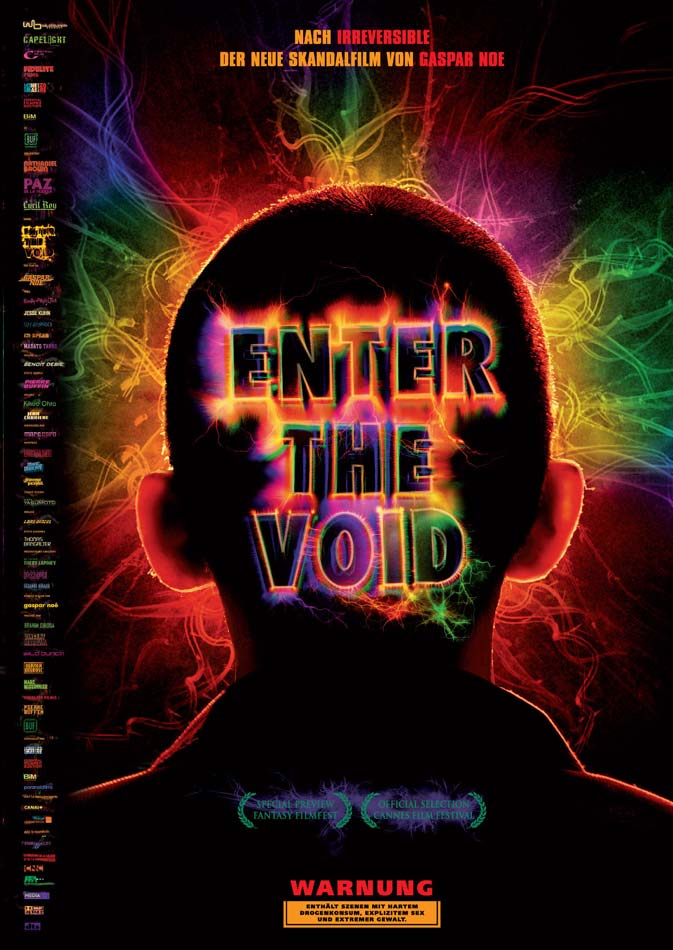 “Who else but the French?”

This was my first reaction after watching “Enter The Void” by Gaspar Noé. There was a lot of talk when the movie first came out and a few friends told me about the movie and how cool and great it was and I was eager (kinda) to watch it someday; as I really did not know what the movie was about, except that drugs have an important role in it. Well fuck yeah, a drug movie; something new and completely refreshing, huh?!

There’s Oscar, the main character sitting in his flat in Tokyo, philosophizing about life, death and drugs of course, and after a few moments you dive into Oscar’s drug inflicted nirvana because he smoked asbestos, or what the heck do I know, I’m no drug addict; and what you see in his mind are algae-shaped Winamp-like visualizations.

“FUCK! Not another ‘The Tree Of Life’-like bullshit, oh gosh; NO!”, I was lying in bed and writhing in fear. But it turned out differently than expected. I was relieved that Terrence Malick did not participate on this production.

To resume the story quite shortly, Oscar’s a drug dealer and was separated from his sister, Linda; at a very young age, after their parents died in a brutal car accident.

Eventually he convinced his sister to come and join him to Tokyo, as life down there seems to be carefree. Too bad there’s Oscar’s friend Alex who told him at the police in revenge for having slept with Alex’s mother (former stripper, you would) and after a short chase Oscar gets shot and dies immediately; but his soul floats around Tokyo’s skyline and observes the lifes and destinies of his friends and companions. An oath Oscar took with Linda, as he promised he would never leave her, keeps him from going beyond.

“Enter The Void” attempts to thematize life, death and re-incarnation but fails to convince me. I do not believe in re-incarnation. When you die, your body turns into hummus. Period. There’s no soul that will conquer another body / lifeform whatsoever… but that’s not the movie’s fault if I don’t believe in such sorcery.

The overall darkish atmosphere tries to be over-disturbing with all the neon-lights in Tokyo and the milky-foggish point of vue from Oscar’s soul down to earth is a very tiring experience. Don’t get me wrong; I welcome every director who brings new accents in film making and camera perspectives. But as my former English teacher used to say: “Enough is enough!”. Everything can be overused!

Another point I dislike is the exaggerated perversion and provocation. What’s the point of showing the tragic car accident that killed Oscar’s and Linda’s parents on multiple occasions, with little Linda screaming all her anguish out of her lungs? Why do I have to see how Alex (Oscar’s traitor) sucks dicks to make a living? I mean, you want a tear jerker, Gaspar Noé? Really? Or do you wank at the idea as on how you can shock your audience? This was my opinion after watching the scene with Linda’s abortion and the fetus lying on the kidney dish.

For a minute there, I was expecting a Gang Bros truck coming by with a handful of potent stallions jerking on the fetus and run over it afterwards.

Movies like this one leave a very bitter aftertaste in my mouth and I cannot say that I liked “Enter The Void”, because I am not into this french over-stylization of violence and perversion. It’s not violence itself in movies that disturbs or disappoints me, but the fact that some directors / filmmakers give more value to shocking scenes than to a flawless / convincing storyline.