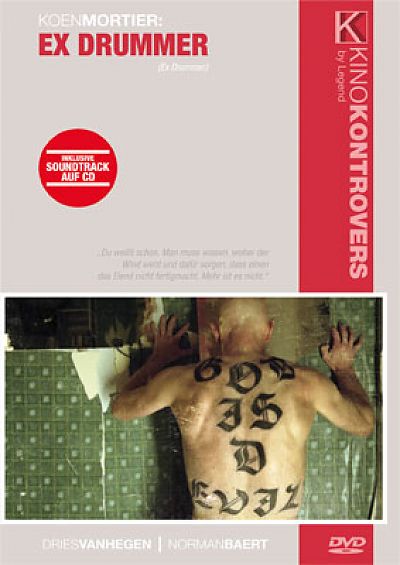 We have all had the same experience before: a movie that gets hyped up so much by your friends that it can only end up being a huge disappointment. Stories of people getting sick while watching the movie and other highly exaggerated stories that have tempted us to go and see movies time and time again only to leave you shrugging and thinking to yourself, it wasn’t that brutal.

This very same experience was one I had after watching Ex-Drummer only with one exception, the movie didn’t totally suck. It’s a weird roller coaster ride of laughing your ass off and shaking your head at the either totally absurd or disturbing images you’ve just witnessed.

Just think of the most disturbing and dirtiest jokes about sex, big cocks, gays, disabled people and rock music all wrapped into one weirdly entertaining movie with moments of cinematic brilliance that remind you of David Lynch’s work or movies like Fight Club. Though this movie isn’t all laughs, in fact everything goes horribly wrong for the protagonists in that movie.

This movie is about 3 disabled losers looking for a drummer to complete their band, which they think they’ve found in the famous author Dries, who also has one handicap: he can’t play drums.

Dries stands in total contrast to the other 3 main characters as he’s a highly intelligent, very successful book author living in his penthouse which makes him look like a god looking down on the scum of the earth. Dries does end up agreeing to form a band with the 3 lowlifes and they decide to call themselves “The Feminists”, as according to them 4 disabled musicians have as much right to exist as a bunch of feminist women.

They plan to enter a rock contest in Ostende and show of their songwriting skills, but encounter the lead singer of another contesting band “Dekke Lul”, which would be translated into “big cock”, who threatens to fight them for playing a song that has the same title as one that he wrote.

All along the story you see that Dries is slowly manipulating the others, playing with them until everything goes to shit.

I will not get much more into the details of the story or the characters as to not spoil the experience for you.

What made the movie entertaining for me was the brilliant use of rock and punk music and a few cinematic choices, like having the lead singer in his own house always seem to be walking on the ceiling, that give the movie a very cool but creepy atmosphere.

This is not a movie for the lighthearted as the themes depicted in this movie range from rape, to child molestation to dismemberment. If this isn’t a problem for you, then you should definitely check out this weird entertaining roller coaster ride of a movie.

This review was written by our freelancer Jeff.