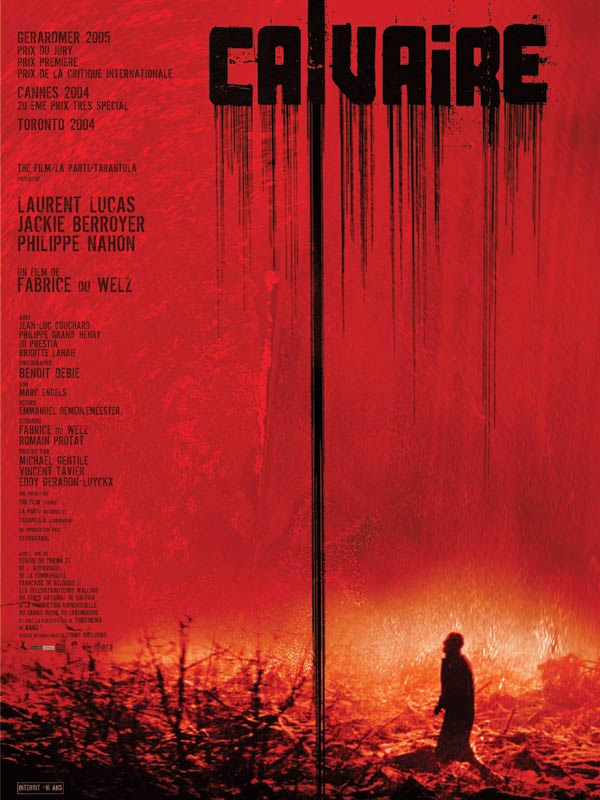 Calvaire (also known as The Ordeal) doesn’t sound like a noteworthy cinematic experience if you whittle it down to a simple description. A few days before Christmas, a man finds himself stuck in a remote woods area with his broken down van and gets a room for the night at an isolated inn. Sounds familiar, right? It’s the world’s safest horror formula, it’s been done a bazillion times with minor variations, and even those variations have a tendency to be utterly predictable.

But before you scream “next”, allow me to inform you that this film turned out to be a gem among a sea of pebbles. There were two reasons why I decided to watch Fabrice du Welz’ picture despite the less than convincing plot summary: the fact that it was partly shot in Luxembourg (which is always enticing) and that it was featured on a New French Extremity movie list (a collection I am currently trying to wade through.) My expectations were low, but it is safe to say that Calvaire surpassed them.

First, I love the methods used to create the sense of impending doom throughout the first half of the movie and the generally eery atmosphere. The film doesn’t have a soundtrack, except for a violin tune during the final shots and credits and a piano tune during an earlier scene which I cannot describe for fear of spoiling one of the creepiest and most iconic moments Calvaire has to offer. The cinematography is just incredible in a toned-down way. The scenery is enveloped in grey, hazy tones, there are no flashy colours or outrageous effects, and coupled with the raw beauty of Belgian/Luxembourgish nature, this makes for a gripping and aesthetically pleasing viewing experience.

Then there are the characters and the brilliant acting. The protagonist, a singer and entertainer who goes by the name of Marc Stevens, has a talent for attracting people — including weirdos. And we buy it. He exudes charm and possesses the stereotypical timid, sensitive nature of an artist that appeals to both women and men of all ages. The owner of the inn, Bartel, is introduced to us as a suspicious but at the same time likeable teddy bear who would never harm a fly, and we spend a quarter of the movie wondering when or if he will snap. The clever scenes leading up to the break of bizarre madness fill us with tense anticipation, and that psychological thriller aspect of the film is its definite forte.

The first ~50 minutes deserve nothing short of a 9/10, it’s the remaining minutes that make me put a lower rating. While Calvaire is innovative and well made from start to finish, it did disappoint me a little for its sudden, drastic change of course about midway through. The way I see it, it dragged the movie down to a “senseless violence for the sake of it” level, which could have easily been avoided with a promising start like that. I still think it’s a must-see for fans of the genre and recommend it to anyone who is into European art house cinema. Prepare for a surprisingly disturbing ride if you do check it out.