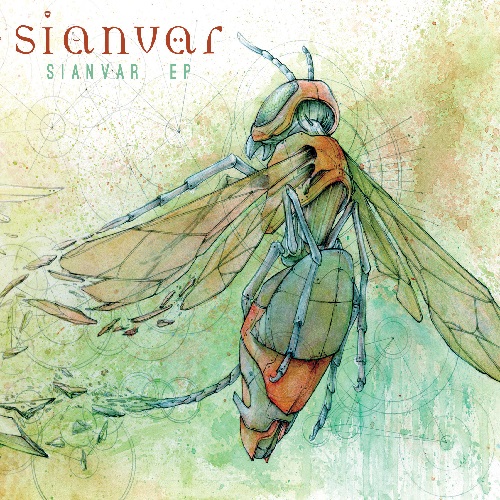 Initially, my plan was to review the handful of albums that I didn’t get to do last year, either because they came out too late or due to me simply missing their release. However, I did stumble over this little gem which marks a great start into 2014, since it was released on January 5th! As you might have guessed from the artwork, I’m talking about Sianvar and their self-titled EP.

This quintet is somewhat of a supergroup, with members from Dance Gavin Dance, A Lot Like Birds, Stolas and Hail The Sun. Unsurprisingly, the band plays super catchy post-hardcore which will immediately please every fan of the genre.

The five tracks actually have a remarkable variation to them; jumping from fast-paced scream-filled passages to melodic dreaminess without missing a beat or breaking the flow…but I could not have expected anything else, if you consider the above-mentioned roster.

Every single instrument is pushed to its limits with the intricate guitar riffs and complex drumming, which prevents these twenty-two minutes from getting boring even after the fifteenth play. The same goes for the vocals, which almost constantly switch between clean singing and screaming, thus giving enough variation to avoid repetition.

All in all, the Sianvar EP totally deserves to be checked out by everyone and sets the bar for this year’s future releases at a considerable height! Be sure to check the band’s Facebook page and listen to the tracks below! Enjoy!