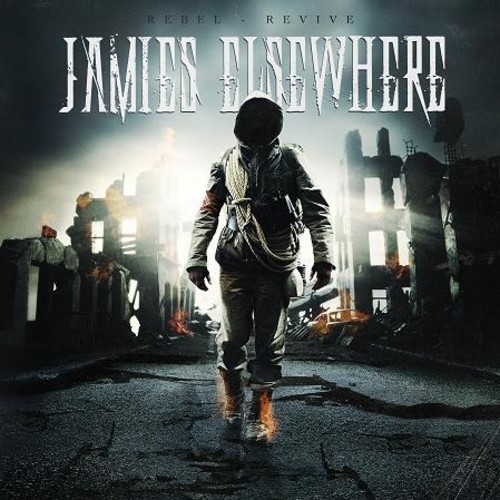 Today I’m going to write about the third successful crowd-funded record that I’ve been a part of so far: Rebel Revive by Jamie’s Elsewhere! The follow-up to their 2010 effort, They Said A Storm Was Coming, was supposed to be released in July 2013, but it got delayed due to unforeseen production issues…and I couldn’t be happier, since the long wait has definitely paid off!

Back in 2009/2010 there was a rise of bands that played post-hardcore mixed with a pirate-inspired theme and the (now) quartet from California was one of them. Now, don’t be confused by the so-called “piratecore”: they don’t sing about rum and treasures, but they have this very particular epic song structure to them…it’s kind of hard to describe, but if you’ve listened to a few bands from the genre, you’ll understand.

But let’s return to the record at hand: Rebel Revive is jam-packed with everything the fans, myself included, have been longing for and then some. Amazing melodic guitar parts go hand in hand with breakdowns and tastily heavy riffs. The string fraction is backed up by pretty straight-forward drums with occasionally intricate foot patterns; nothing to write home about but they do what they should: keep the groove going! Also omnipresent during the thirty-seven minutes are not too obtrusive keyboard sounds and very seldom scratching.

The vocal front has seen the biggest change with the arrival of the new singer, Justin Kyle, who sounds similar to the previous vocalist but has a bit more of a soul flair to his clean vocals. His screams and growls are good, but one clearly notices that his strength lies in the clean department. However, I do prefer one vocalist who gives it his all, to two who do a half-assed job…so I’m all for it here.

The other remarkable thing is the amount of guest vocalists on these ten tracks: Garret Rapp of The Color Morale on the opener, Tyler Carter of Issues on track number three, the electropop singer DEV on In Depth Perception and last but not least Phil Druyer and Nick Sampson from I Am Abomination on Capital Vices. While guest vocalists are often a good way to give weak songs the needed edge, this is not the case here, because they compliment the various tracks perfectly.

To sum it up: the second record by Jamie’s Elsewhere does not re-invent the wheel in any way whatsoever…but it certainly adds some much needed oil to it, so to speak. If you are one of those people that have never really been able to let go from this sound, you will be in for a treat; and if you are completely new to it…don’t look any further, this is as good as it gets to start discovering the genre! Be sure to check out the band’s Facebook page and listen to the song below!