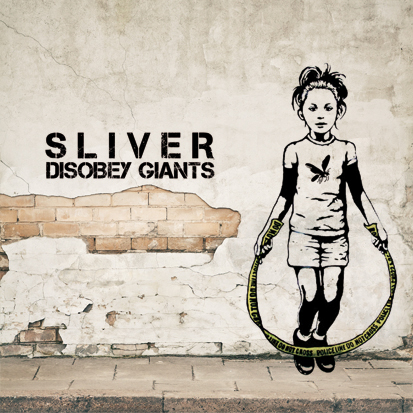 A few weeks ago I went to a local show and since I was there quite early, I got to witness the soundcheck of the opening band Sliver. Having never heard of them, I was severely impressed by the two half-songs they played and I figured that I had to feature them on here and after their gig I was one hundred percent sure about it. Sadly, they didn’t have a recent release which is why I’m going to write a few words about their 2012 record Disobey Giants!

The quartet, which is composed of people from France, Belgium and Luxembourg, plays a hard-hitting mix of alternative rock and hardcore which sounds unlike most of the stuff you hear these days. Especially the omnipresent usage of synthesizers and keyboards is something that makes them rather unique in my opinion. The traditional instruments don’t fall short either though, by delivering a driving performance all throughout the twelve tracks.

The main concept of the band, and this album, is of a very anti-political and anti-capitalistic nature and the lyrics make that quite clear. While it might be annoying to some, because they prefer ignoring the sad reality, it is exactly that strong message that makes these thirty-seven minutes so special. On top of that you have the amazing clean vocal work, with that lovely “Frenglish” accent, and the screams which are amplified by a megaphone that just make it a blast to listen to.

All in all, there is absolutely no excuse for not checking out Sliver, especially since the entire album can be downloaded for free on the band’s Bandcamp page. I, for one, am very excited for later this year or early 2015, when the guys are supposed to release new music. As a closing statement, I’ll say that if you get the chance to see them live, do so; you won’t be disappointed. Be sure to sure to listen to my favorite track Small Is Beautiful below to give you an idea!