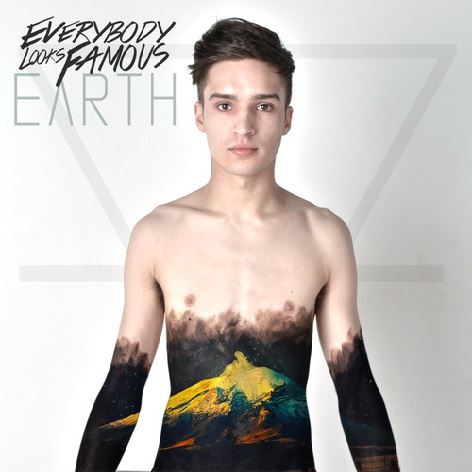 I’ve said it before and I’ll say it again: I’m a sucker for pop punk with female vocals. No matter how good or bad the band is, I feel like I have to check them out and give them a chance. In the case of the UK-based Everybody Looks Famous that was actually a smart decision! They are about to release their new EP called Earth next week and they managed to bring something quite solid to the table.

The four tracks on the new endeavor of the quintet all have that really dreamy melodic feel to them, which is rather nicely achieved by frequent use of synthesizers accompanying the “classic” instruments. The latter are, I would imagine, deliberately held rather basic, but effective in the sense that they don’t take you away from the zone the music puts you in.

The vocals are mostly done by the female lead singer, but sometimes underlaid by the two, male, guitarists who serve as background vocalists, thus creating a fitting contrast and adding variety to their sound. There is nothing negative whatsoever I can say about the vocal performance in general, since it’s a flawless job…but I do have to say that the timbre of the singer is nothing I’ve never heard, so I wasn’t exactly awestruck.

The only real critique I have about these, mostly, mid-tempo fifteen minutes is that I would have wished for a slightly different mixing/mastering: in some passages the individual instruments are a bit too low in the mix, and in other cases the vocals are. But it’s just a minor gripe, that I can easily forgive since the overall experience is enjoyable enough!

In closing, I’ll say that while ELF are not breaking new ground, they are obviously passionate musicians that deserve to be heard by more people. So give Earth a listen on the 16th when it comes out and visit the band’s Facebook page for more information about their progress!