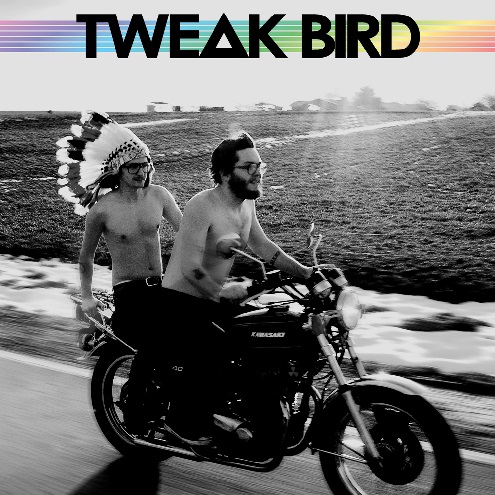 As you may have noticed I’m in a mood for simple rock music these days. Well then let’s have a look at another band which doesn’t need complex arrangements or five different instruments to knock me out of my socks.

Dirty guitar, aggressive drumming, The Future’s coming, that’s how Tweak Bird’s second and self titled album welcomes you. Two very feminine voices will lead you through the coming 27 minutes and 16 seconds. Shock moment: when you google the very feminine voices you’ll find two very bearded men, one on guitar, one on drums. So again, we’re talking about a two-man-band here. And again, no lack of energy! Round Trippin’ is a 1:12 minutes shorty which may cause massive brain damage. It is followed by A Sun / Ahh Ahh , the album’s first single. This track pretty much sums up the sound of these two fellows: distorted rock’n’roll with a Red Indian touch, due to the singing, including a psychedelic and 70s touch. Did he write Red Indian? Yep! If I had to draw a picture about how this sounds, it would look like the CD’s cover.

Beyond increases the pace again and so we’re already half trough. The second half starts with two powerful but melodious tomahawks before Flyin’ High offers us the peace pipe, filled with dubious substances. The get-out dance is called Distant Airways, very dark, very dry, you’re alone in the desert again, have fun with the coyotes!

[youtube https://www.youtube.com/watch?v=V42dOH57kGc]
Recommendations: The Future, A Sun / Ahh Ahh, Beyond.