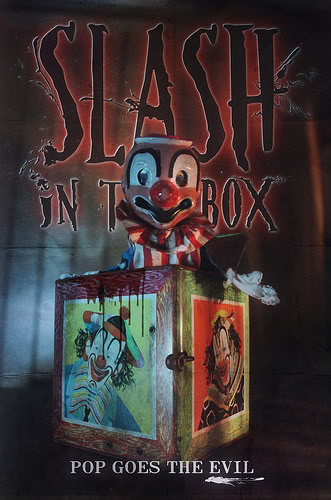 As you for sure have noticed, Eric and me have a soft spot for all kind of different short movies. Yesterday, when I was talking to Eric about what reviewing next, I came to the conclusion to do one of my all-time favorites and well-known classic short flick (I won’t tell you which one I mean;)). Before I went to bed I checked all my mails, twitter and stuff just to see that writer and director Nick Everhart wrote me a direct promotion message. I have to say that my timeline was full of puff pieces for Slash-In-The-Boxes all over the day and that’s why I already have seen it. But it only was later that day, after the private message, when I decided to postpone my other review and to give this one a try.

The main reason behind my idea of doing a review is not the fact that Slash-In-The-Boxes is a horror movie but as I already wrote in another post, it’s my idea of supporting young directors and producers who love what they do and that’ s exactly what you can see and feel while watching this 5 min long flick. The most important and simultaneously the most difficult  thing about (horror) short movies is to draw the exact balanced line between building up an atmosphere with an interesting story and coming to the point as soon as possible while keeping the right moment of climaxing in mind. I’ll try not to spoiler  but I can assure you that this movie achieve all these, even though subjective, criteria.

Furthermore, kudos to Nick Everhart for the Baseball scene and the well elaborated and typical slasher camera move at the end of it. While talking about stuff I like and movie characteristics I have to say that the cast of Elizabeth Masucci was a really nice choice. Every man likes having a pretty girl in his horror movie. The role of a cute, blonde slasher flick girl wearing short pans is always nice to watch.

Enough ass-kissing now. There are also a few things which I didn’t like. The first murder scene doesn’t work for me and the fake blood could have been a bit more realistic. Why doesn’t it work? Of course this is a personal opinion again but I blame the vertical camera movement for it. I think that the duration of the scene is a bit too long and too constant.

Spoiler in the next paragraph

I really liked the ending but something bothers me. Maybe I just don’t get it (if so, please explain it to me in the comment box), but how is it possible that a head of an adult man all of a sudden fits into a small clown toy box thing? I don’ t get the shrinking of the head. For me, the scene would have worked much better if it was the box growing (and not the head shrinking).

The critics may sound like I don’t appreciate or like the movie, which isn’t true. All in all Nick Everhart did a great job and as a horror fan you should not miss this short.

Slash-In-The-Box from NICK EVERHART on Vimeo.

pictures are retrieved from the official website PopGoesTheEvil.com  and Vimeo