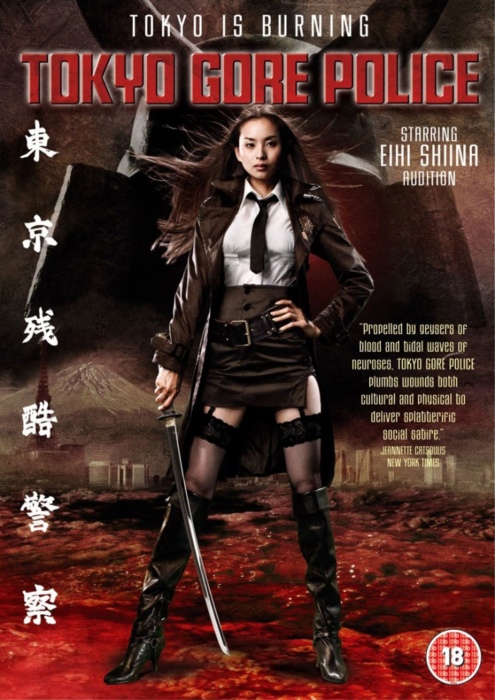 After the very disappointing JOSHIKYÔEI HANRANGUN, I decided to re-watch the one and only Tokyo Gore Police for the 5th time now. This movie is exactly what I am talking about.

First some facts, so that you can imagine a little bit what this Japanese splatter is about. After having done the special effects for Noboru Iguchi’s The Machine Girl, Yoshihiro Nishimura was asked to do another movie. He eventually decided to do a remake of his own independent flick Anatomia Extinction, which he then called Tokyo Gore Police. Taku Sakagushi, who has already worked together with Nishimura on the great Meatball Machine, took the role as the choreographer.  Furthermore Noboru Iguchi, who is also responsible for Adult Movies like Veterinary Pet Beauty Big Bust W Cast Teacher and Beautiful Girl on The Toilet 2 – Secret Excrement, created together with Yūdai Yamaguchi (Battlefield Baseball, Meatball Machine) the great propaganda television spots, which from time to time appear in the movie. And then there is Eihi Shiina. Yup, you are right, it is Asami “Kiri kiri kiri kiri kiri” Yamazaki from Takashi Miike‘s masterpiece Audition. 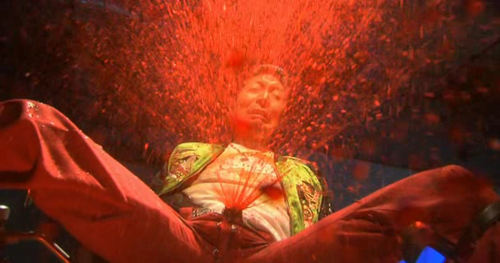 If you are a bit confused right know, I recommend to not watch the movie. If you know all these different people and movies mentioned above, you probaly also know Tokyo Gore Police. If you have no clue what I am writing about but think that the whole stuff sounds quite interesting, grab a beer and lean back.

It takes Yoshihiro Nishimura exactly 1:32 minutes before the first head is blown off, which is a clear statement and resumes the whole movie in a pretty damn good way. The story takes place in future Japan, which seems to perish in violence. But before the country is completely lost, the decision to establish a private police unit called Tokyo Gore Police is made. The head of the TGP unit is the sexy but a bit traumatized Ruka, who especially takes care of the zombiesque, mutated Engineers. As the story goes on and the blood is squirting, Ruka is detecting a complot in which she is involved personally…

Tokyo Gore Police is build on a triangular relationship with different weight on each balance point. First of all and not deniable, the movie is pure trash, composed of blood, guts and excessive “comic” violence. Arterial sprayings, a croco-mermaid, a breathing chair with a drip and a flower-penis ejaculating into a group of bondage guys and other freaks. All this stuff and even much more doesn’t only show how insane Yoshihiro Nishimura is but also his love for details, fantasy and creativity. I have rarely seen such a good penis immitation than in Tokyo Gore Police. 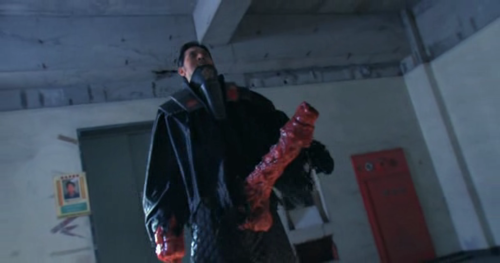 Furthermore there are, from time to time, some genius and really artistic pictures poking out the pile of rubbish. The screenshot below (even the whole scene) isn’t only about a girl cutting off some pervert’s hands. The guy leaning back and looking into heaven while Ruka is walking away, using an umbrella to protect herself from the blood, is absolutely amazing. The image of the umbrella changing from an executive weapon to a protection (as it is supposed to be) is maybe an old one (even if often shown the other way round), but has never been realized in such a brilliant way as in Tokyo Gore Police. This is just one example of the artistic imagery which occurs in the movie. 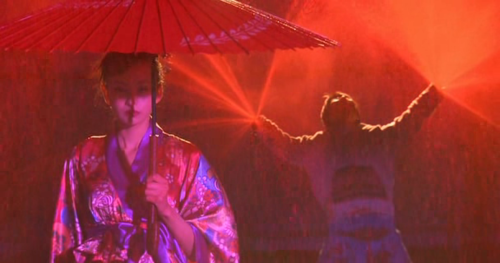 Finally, like in a lot of Japanese movies, you can also detect here something like social criticism. The extended black humor and graphic violence in some way picturizes social problems like the vicious circle of criminality, police violence and corruption. Self-mutilation, suicide and the “why?” are further dominant subjects. 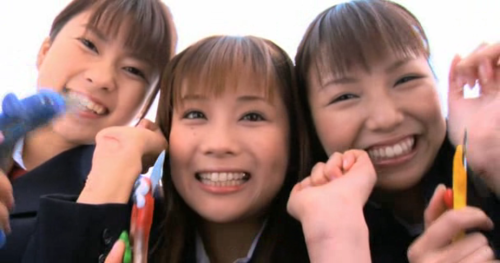 All in all Tokyo Gore Police is a fucking grotesque and bizarre gorefest, with extreme and perverse black humor (the Wrist Cutter G and the torture Wii parody commercials are brilliant stuff) and sick cyberpunk elements. A lot of reviewers claim that the background imagery is lousy and that the characters are too weak. I think that the “poor” background setup (if you can call it that way) perfectly fits and reflects the dark and cold atmosphere of the movie (even though this atmosphere is sometimes interrupted by colorful sickness). As for the characters, I think that just because they aren’t perfect it is possible to build up this triangular relationship I described above. And yeah, don’t fuck with Eihi Shiina, she’s near perfection! To conclude, there are many reviews out there which refer to Robocop while wrtiting about Tokyo Gore Police. I have to admit that I have no clue why because I have seen Robocop only once when I was 5 or 6 and can’t remember a single bit of the movie. But I don’t give a fuck about this Hobocop, watch TGP and have fun!