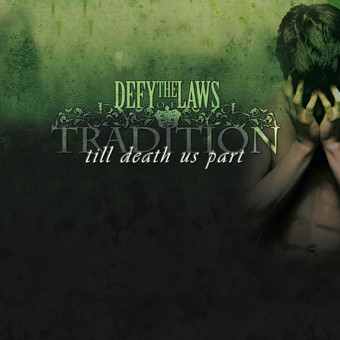 Defy the Laws of Tradition’s debut Till Death Us Part from 2009 is by far not a typical breakdown-infected, faceless and boring metalcore record like most of ‘em are. Philipp Treiber (guitar/vocals) told me that his father had a big musical influence on him by making him familiar with bands like Grateful Dead, Frank Zappa but also Journey and Boston. Furthermore he stated that he’s very opened towards music, as he listens to a lot of different styles.

I don’t know what the other guys’ views are but you can hear and feel a vast variety of different inspirations. Metalcore, melodic death, thrash and modern hardcore surely are the principal constituents of this fresh and tasty soup. These ingredients at no point overpower the record but, on the contrary, let enough space for other spices from time to time (a bit of punk rock here, a bit of post-rock there). A proverb says that too many cooks spoil the broth. This doesn’t count for Till Death Us Part, cause every note has its right to exist. Every single aspect of the record is integrated and responsible for an heterogeneous and interesting output.

I have written lots of reviews over the past years and if you have followed me, be it my old blog or El Gore, I think it is clear that while listening to or writing about music, I often concentrate on the voice. It’s not the lyrics I am interested in but rather the acoustic color and the authenticity.

For example I am in no way sexist but I can’t listen to female voices in music aside from the beautiful Beth Gibbons from Portishead and Jón Þór „Jónsi“ Birgisson from Sigur Rós.

And so there is a (personal) diminutive negative aspect of the record. The guys could have used this sleazy, corny melodic, clean voice a bit less. Not because the voice is bad in itself or because it doesn’t fit but because the screams, shouts and growls are so energetic and aggressive that I want more. I know that this mixture of clean singing and shouting/screaming is an identifying feature of the metalcore subgenre but I don’t like this element because a lot of power and aggressiveness is being lost. Altogether that’s my problem and not something I don’t like about the band, but something I don’t like about the genre.

As my roots lay in the oldschool and primitive Black Metal, I am not a person who likes talking and writing about the technical skills of a band. So I will also cut it short for Till Death Us Part. To be concrete, I don’t give a damn fuck about techniques. Confucius already said: “Malmsteen has a lot of skills and he is able to play 1000 notes per second but David Gilmour plays him against “The Wall” with one single bending.” Why? Because Gilmour feels what he plays. And that’s exactly what I thought while listening to Till Death Us Part. Don’t get me wrong, Defy the Laws of Tradition, in everything they do, maintain the high standard. More important is, that the band is authentic, honest and play with heart. Good music is felt music and these guys definitely feel what they play. Kudos for that!

To conclude I have to say that the playtime of the record may be a bit too long. Always remember guys that it is far better when a listener really likes the music but wished that the record, concert or whatever was a bit longer instead of getting bored with the time because you keep on playing and playing.

You should give these guys a try and I am really looking forward to their new longplayer.
[youtube https://www.youtube.com/watch?v=E0JhUYT8DeE]