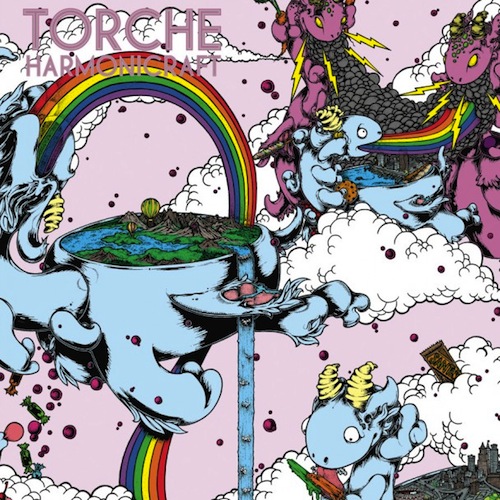 Two-horned creatures puking rainbows in a pink candy-sky-land. One of those covers that just oblige you to buy the album, no matter how it sounds. The good thing in this case: it doesn’t just look like a drug trip becoming true, it also rocks butts right from the beginning. And I can’t believe that the first song sounding like a metal version of “I Want Candy” is a coincidence.

Torche’s third album is something like a newbie’s guide to sludge music. You may even call it pop-sludge. If Fang Island is the good-mood-metal band of these days, then Torche should be the one for happy sludgy holidays. Harmonicraft cuts its own path fluently until the end. Popish guitars never take too long to drift into a distorted outburst, walls of sound never finish up being boring. You may not like the Volbeat-like vocals. Fair enough, but you can’t really hold it against those cute creatures. One look into their lunatic eyes when vomiting in all colours of the rainbow, and resistance is futile.

During the middle part of Harmonicraft the guitars slow down a little, giving a short breath to the visitors of candy-land.  The length of about 38 minutes doesn’t allow too many pauses though – the next thunderstorm is already waiting to come down on the listener.

The release may seem to become more and more monotone at first appearance, but the dynamics of sludge need more listening sessions to be spotted. The strong riffs even sometimes drift into a 70s rock homage without being insincere at all. The only thing which doesn’t match the overall appearance is the doomy conclusion, with best regards from Black Sabbath.

By the way, their video for Kicking would be a perfect aspirant for Trash Monday!
[youtube https://www.youtube.com/watch?v=F1obEt5dmmo]