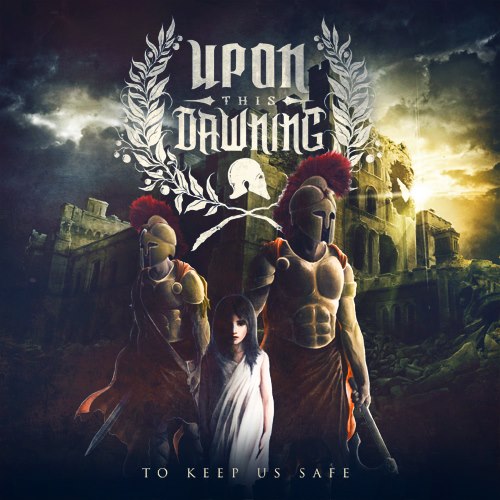 This week it’s time to review a “new” band: Upon This Dawning! The quotation marks are there because the Italian band has been active since 2006 but To Keep Us Safe is their major label debut. The record, which was released in October 2012, sounds like a mix between Asking Alexandria‘s Stand Up And Scream and Motionless In White‘s Creatures. Obviously this means that it doesn’t re-invent the wheel but I’m confident in saying that people who liked these two CDs will not be disappointed by this one. For the others: sit back and give it a chance.

The twelve songs are well-written and feature quite a few memorable break-downs aswell as entertaining riffs. And even though there are no major musical surprises, boredom is not a factor that comes into play. On the drumming level you can find some tasty double-bass work but other than that it’s nothing you’ve never heard before. One thing to note is that the drum sound is very modern and might not be everyone’s cup of tea. Personally, I don’t mind very much…so I’m not put off by it.

The whole ensemble is underlaid by electronic parts and a couple of orchestral parts featuring violins and various other string instruments. Even though this is, again, nothing revolutionary it spices things up quite nicely and adds a certain dynamic to the songs.

Lyrically the songs venture into well-known themes but luckily a handful of passages will stand out immediately which also adds a recognizable factor to most songs. The vocals are provided by two people: the main singer taking care of the screams and the guitarist singing the clean passages. Probably the highlight to most newcomers to this record is the guest appearance of Chris Motionless of the earlier-mentioned band Motionless In White on the song A New Beginning.

All in all, I’ll say that the band shows a lot of potential and I’m sure that in due time they will end up finding their own style and refine it like many bands have done before them. For a debut album these thirty-eight minutes are definitely not a result to be ashamed of! Check out their Facebook page if you want to keep up to date with news and listen to their debut single below! Forza!