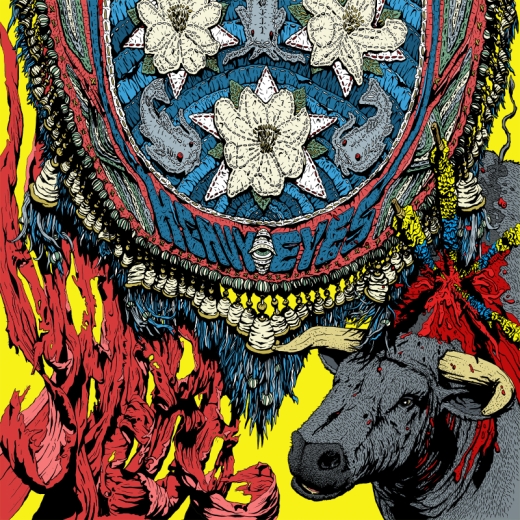 If one had to find a suitable common theme in order to write a review about an album, then this one’s would be a puffing, steaming and stamping locomotive, which is not rushing at all, but which puts everything out of its way. Don’t think too much of AC/DC’s Rock’n’Roll Train, because The Heavy Eyes’ blues rock is surely heavier and often something for real headbangers.

This train is not willing to take a stop throughout the 11 track long journey combining riffs, old bluesy sound and a stoner hearted engineman who relentlessly feeds the engine with hard wood. In other words: just give Tom Morello a guitar and tell him to sound like crashing a campfire party; this would be the result. The production is old fashioned and focuses on highlighting the guitars as scratchy as possible, not to forget the ever-present bass. Unfortunately the drums clearly have to take a step back, which, in the end, is forgivable. The overall appearance leaves the listener behind with one big question in his thoughts: what’s the live sound of all this? (European tour guys, maybe sometime?)

For the rest, the groove and the thoroughgoingness just makes this album one of the coolest bad ass things you lovers of the genre may have ever heard, which brings me to the vocalist, who sounds like a winching and squeaking hillbilly-like dude. He serves a performance which in the same time is damn annoying but still you can’t really complaint about, facing such sovereignty, and he just doesn’t seem to give damn – just take it or leave it. At the end of the day one could say that also the vocals are a piece of the psychedelic puzzle that casts a spell over fans of Maera. Drink some whiskey or wine and enjoy the riffs and the landscape rushing past your window.