Wrong (2012) is a movie written and directed by French musician, director, writer, cinematographer Quentin Dupieux better known as Mr. Oizo. I’ll be honest with you, I am neither a fan of Mr. Oizo, nor did I enjoy the predecessor movie Rubber. Therefor it is no wonder that I had absolutely no expectations when it came to Wrong and I only watched it because I was staying at a friend’s house and he decided to put the movie on screen. Thank god he did! Wrong is the weirdest but best non-horror movie I have seen in 2013 so far.

The plot is about reserved Dolph (Jack Plotnick) who on one particular morning realizes that his dog has disappeared. Later on he discovers that he and his dog became part of a conspiracy which leaves him the victim of a plan mysterious forces set in motion, ostensibly for his benefit (John DeFore).

If this wouldn’t be strange enough, Dolph lives in a reversed world. On the one hand unimportant circumstances become important. Random facts like a pizza logo showing a rabbit on a scooter are flogged to death until they become significant. On the other hand Dupieux leaves the audience without any explanation about important and crucial events in the plot and the viewer, just as Dolph, becomes reconciled to the so seemed nonsense. 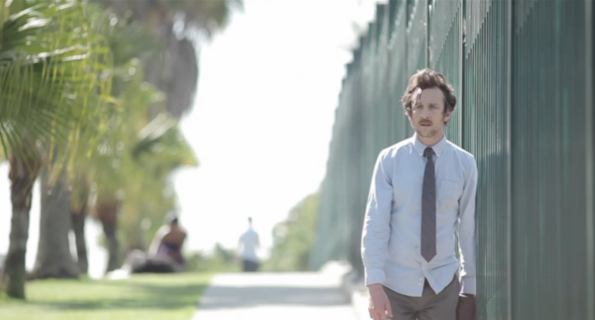 Right at the beginning of the movie you may cast doubt on some events but believe me, this won’t last for long and you are sucked right into the movie.

I am not sure if this is a matter of fact or only a wrong perception due to the subconscious acceptance of the paranormal and surrealistic visual narration but the uptight absurdity is kind of replaced by “simple” nonsense humour with the appearance of Master Chang (William Fichtner) in the second half of the movie. Nonetheless the important element of creative absurdity, contrary to Dupieux’ Rubber, works really well.

Wrong is a grandiose profound and bizarre nonsense comedy (with a fantastic minimalistic soundtrack) which irritates the viewer where it can. The movie is everything but mainstream but if you are into weird independent stuff you should give this a try.