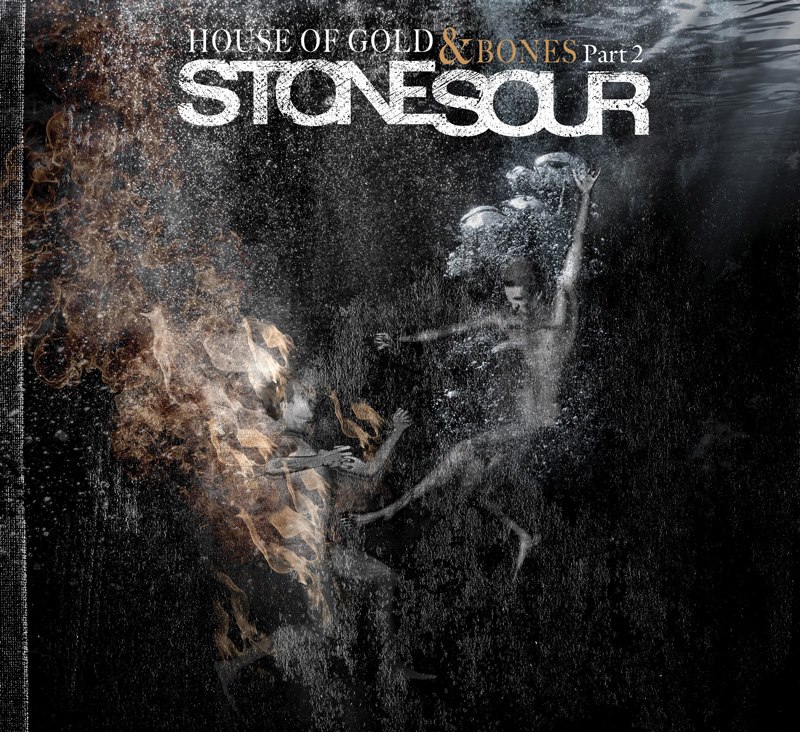 Stone Sour are back, almost exactly six months after the release of the first part of their double concept album, to deliver House Of Gold & Bones Part 2! But first, it’s time for a bit of a personal aspect: since early February I’ve been anxiously following the band’s news section in order to clench my thirst for new stuff. When they finally released a stream of the full album one week prior to the official release date, I immediately jumped on it and I only closed my mouth again when the fifty-one minutes were over.

The album starts off with the vocals and an atmospheric piano melody, while slowly introducing the other instruments, only to culminate in a heavy outburst with deep screams and crushing riffs towards the end of the first song. If you’ve listened to Part 1 you’ll already notice a difference here, since the whole thing has a by far more epic vibe to it. Generally speaking, the record also has a far more technical grandeur and even catchier choruses…you can easily notice that the band has definitely found its perfect musical mix here.

Said mix ranges from super rhythmic drum parts and melodic guitar playing to simply balls to the wall passages that will satisfy even the fiercest metalheads amongst the Stone Sour fans. Just listen to the bridge on the song Peckinpah and you will understand what I mean…still gives me shivers. All instruments are, as on the predecessor, spot on when it comes to production and song-writing; no note too much or too less.

On the vocal side, I’d go as far and say that it’s probably the band’s strongest output…simply because it seems that Corey’s voice seems to ripen as time passes. Lyrically, the twelve tracks continue the story of the Human and his, spoiler, journey to the eponymous building. The thing that definitely sells this album for me, however, are the last three songs which not only deliver a fitting end to the tale but each contain a reprise of three melodies from Part 1. You might think it’s a lack of creativity but I personally love it, since it nicely rounds off the entire musical journey.

As with my first review, this one’s not much different: it’s not very objective at all and you might strongly disagree with every single word, but it’s pretty safe to say that, for me, this album already has a spot in my Top 5 of 2013. I strongly urge you to give it a chance, but I’d advise that you listen to HOGAB Part 1 first in order to enjoy the complete thing. Visit the band’s Facebook page and listen to the song below.
[youtube http://www.youtube.com/watch?v=LwkGatmflbw]