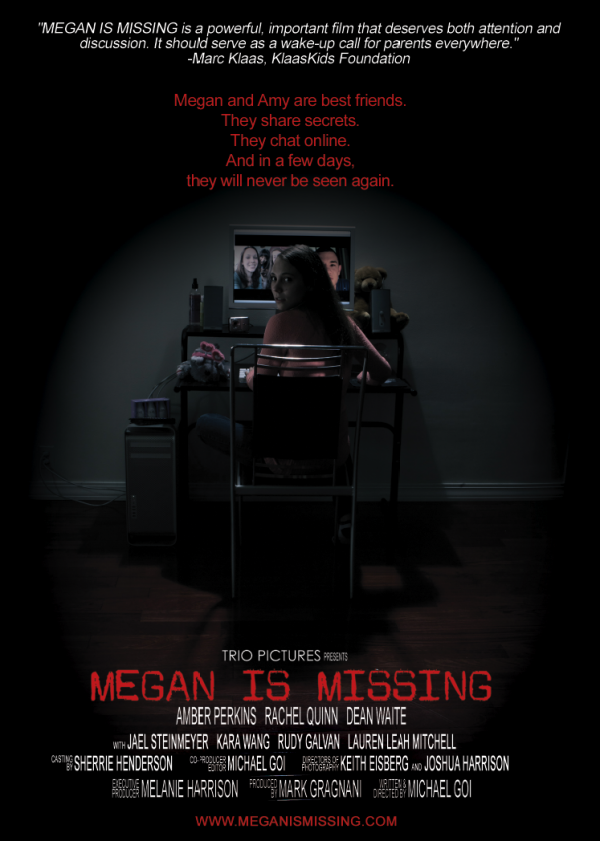 Michael Goi, writer and director of Megan Is Missing, wants to get the word out about the dangers that lurk in the shadows of the Internet. Upon reading that his film is, in his own words, “harrowing in its realism” and “using only fact-based incidences to depict the lives of ordinary kids walking in the midst of extraordinary evil”, I did stop and wonder for a second what experience this 53-year-old dude might have with being a 13-year-old girl, but I gave him the benefit of the doubt and decided to sit through the entire thing regardless.

A gut feeling is a powerful thing, and this experience served as a reminder to trust it more often. We find out that Megan, 14, is the popular girl who sleeps around, parties, drinks and does drugs in order to escape a past riddled with molestation and neglect, and her best friend Amy, 13, is the antithesis: an innocent, virginal daddy’s princess who still talks to her stuffed animals. When the Internet predator, hiding behind the moniker “Skaterdude”, steps on the virtual scene and makes up flimsy excuses about his webcam being broken, Megan is more than willing to engage in one-sided video conversations and eventually meet up behind a diner, not a hint of doubt in her mind. She gets abducted, Amy gets involved, and all hell breaks loose.

Sound hyperbolic? That’s because it is. Goi’s depiction of teenagers is dripping in condescension. Not only does it perpetuate the tired stereotype of the wild, promiscuous brat versus the innocent virgin with no grey area whatsoever, he also has a flawed understanding of how kids use the Internet. You’d think he would have familiarised himself with those habits before making an entire scaremongering movie about its pitfalls, but apparently not. According to this guy, 13 to 14-year-olds use video chat on both their phones and computers for even the most banal, redundant conversations, don’t keep other tabs open while doing it, spend the entire time staring into the camera and say things like “web me later!” Plus, some of the found footage consists of “computer files”, which means that he assumes kids have a tendency to record themselves while casually skyping with their friends, putting on make-up, having a friendly chat with their parents and other mundane, private activities – all of it recorded to their magical hard drives with infinite storage space. One could argue that I’m being nitpicky, but if you’re going to make a film that’s supposed to feel like a documentary, you’re pretty much obligated to go all the way. 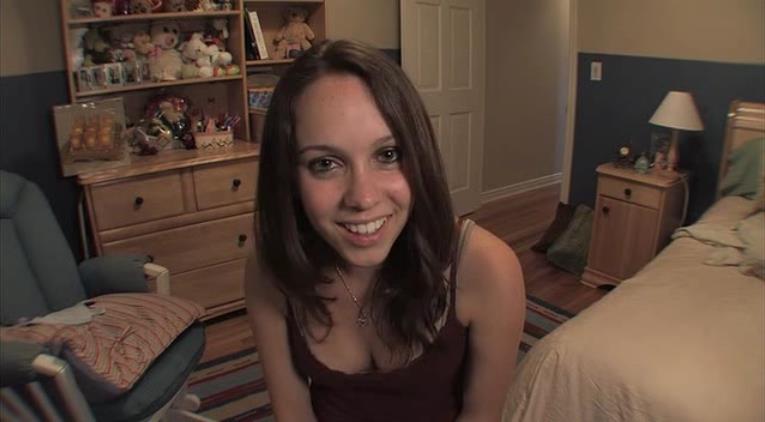 There was one scene in the movie that did manage to send a chill down my spine, albeit for all the wrong reasons. There’s a dialogue in which Megan tells Amy about her first sexual experience in excruciating detail. Goi stated on an IMDB thread that this conversation took place almost word for word between him and a 14-year-old girl. I dare you to watch this scene in its entirety and then think about this information. Actually, don’t. Just imagine a middle-aged man interviewing a 14-year-old about the illegal blowjob she gave in summer camp a few years prior and feel your skin crawl.

The last 22 minutes might make Megan Is Missing a worthwhile watch for a horror fan. Many people found them supremely disturbing, and I can see why, but I was too distracted by the shitty acting and writing to be affected. In summary, what you can expect is one hour of boredom and 22 minutes of madness – it’s up to you whether you want to do that to yourself.

Teenagers, as a demographic, take the most flack. And while it’s true that we all did dumb shit in some form or capacity at 13 and my own experiences don’t negate the experiences of others, Goi’s portrayal of the teenage experience is so overblown as to be ludicrous and makes it hard to take Megan Is Missing seriously. I suggest that before you attempt to make an authentic film about the dangers kids face online, make sure that you are under 40, understand the Internet and have actually attended a party once in your life. It’s all too easy to make a film using every cliché in the book and slap a “based on real events” tagline on it.