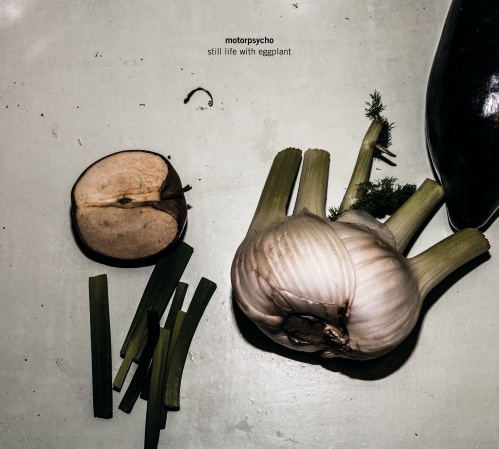 Prog and Psych Rock veterans Motorpsycho are back with their new studio album Still Life With Eggplant. After a huge double album project in 2012, including cooperation with an orchestra and Ståle Storløkken, this release again is more like a back to basic or classic Motorpsycho album, although this kind of vocabulary doesn’t do justice to the Norwegians variety of styles.

Still Life With Eggplant is a very diversified and, for Motorpsycho standards, even a pretty accessible LP that reminds a litte of the 2010 release Heavy Metal Fruit. But unlike the space odyssey that was built back then, it seems that the band takes us to the countryside this time, producing even a kind of acoustic summer song with The Afterglow in the end. Let’s start with the beginning however. Hell, Part 1-3 is what I would call a typical Motorpsycho song (but be careful, I missed around two decades of this band’s history): progressive and strong riffs compared with hypnotizing vocals, not to forget a jazzy outro to end this nearly 10 minutes opener.

August starts threatening before the clouds are thrusted aside and a 60s Woodstock song made in Norway takes over. The thunderstorm takes over again however, and before you realise it the song is over and you’re left behind with wet clothes. Barleycorn again stands for the band’s talent to mix deep melancholic moments with moments of hope and awakening. This duo permanently goes hand in hand, musically and lyrically.

Ratcatcher is the obligatory 17 minute odyssey, trying to hypnotise you right from the beginning before taking you on a journey through dizzying drums, psychedelic vocals and capricious guitars. There aren’t many bands anymore that design so diverting 17 minutes songs.

Still Life With Eggplant is not as strong as the comparable Heavy Metal Fruit , but if you liked the 2010 release then this is surely something for you! Also very recommendable for Motorpsycho beginners.