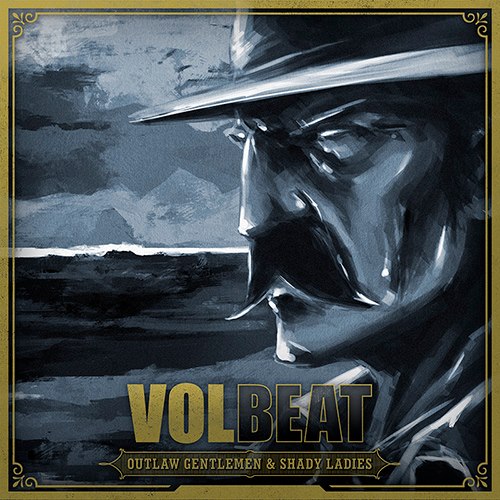 The year 2013 marks the year of the release of the fifth album Outlaw Gentlemen & Shady Ladies by Danish rockers Volbeat. Some people hate the band, some love them…one thing that can’t be argued about is that they constantly deliver amazing live performances. I myself had the chance of seeing them in both a festival and a club surrounding and I can guarantee that you will not be able to stand around still at one of their shows. But that isn’t what this review is about, so let’s get started.

I like to call Volbeat “the AC/DC of heavy metal”, since their sound never changes much but they never release a bad album per se. Repetitive? Sure, sometimes. But never bad. This record does not break that pattern and especially if this is your first time with the band, you will appreciate their rockabilly-metal fusion quite a lot.

For returning listeners I can definitely say that you will not have many “aha” moments, but you will notice a change in their guitar parts. This is due to the recruitment of a new guitarist, ex-Anthrax Rob Caggiano, who brings a new take on their usual riffs to the mix. The other thing you will notice is that there are (even) more songs that are quite clearly aimed towards crowd involvement at shows. Obviously this means that the band intends to get more radio play out of this album, but I for one don’t mind that too much since it still sounds like Volbeat.

This goes for the drums and the vocals as well, not much has changed here…which is meant in a good way. As on the predecessor, there are two guest vocalists again: King Diamond on Room 24 and Sarah Blackwood on Lonesome Rider. Especially the former song stands out quite a lot on the album since it features several guitar solos and the vocals just kick as, but what did you expect?

To be frank: the fourteen songs, which clock in at just under an hour, are nothing revolutionary but every fan of the band should at least give this record a listen or two. For newcomers this is as good as any previous release to get started. Check out the band’s Facebook page for possible tour dates and listen to the song below, which by the way is the softest one on the record.