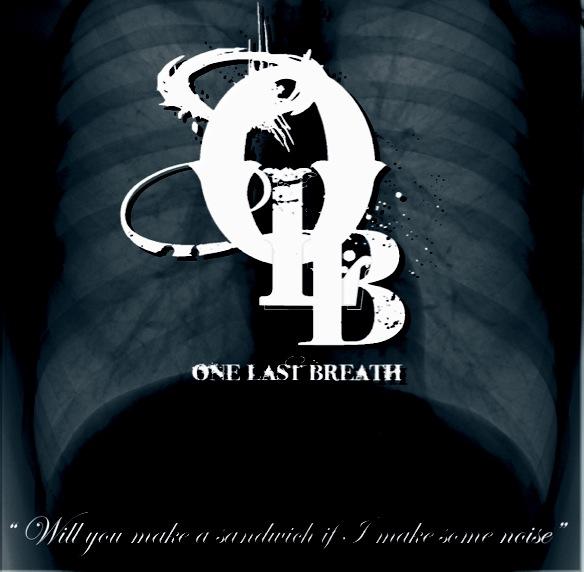 Today I will review the debut album Will You Make A Sandwich If I Make Some Noise? of the local melodic metalcore band One Last Breath. The band is still fairly unknown but the guys have been working on their record for some time now, so let’s see what there is to say about it, shall we?

The first song is an intro that goes on for six whole minutes…my first major criticism. Don’t get me wrong: the concept behind it is great and fits the name of the band perfectly but it simply goes on for far too long and completely fails to get me pumped for the following songs, sadly. The real opener Voices Of War however makes up for it with its driving main riff and the powerful drumming…but again it’s plagued by a similar problem as the intro: it’s too long and thus becomes repetitive…a theme that is predominant throughout the remainder of the forty-eight minutes as well.

There is another big downside to the album: the production. It’s not terrible but, quite frankly, it lacks the necessary power, especially the guitars sound very mushy and a vast amount of the details simply gets lost in the ensemble. Also, it seemed to me that during songs the volume of certain instruments varied from time to time. The vocals on the other hand were quite enjoyable, except the aforementioned mixing.

This is one of the rare instances where I’m glad we don’t give out ratings for albums because I would have to rate this album rather low…which I’d be happy about it if were truly justified. Because here’s the catch: the songs have a ton of cool ideas and I’m confident in saying that under different circumstances I’d be able to thoroughly enjoy the eight tracks. If you are not put off by my rather subjective points of critique, by any means give this band a listen! For more information about them and the release date of the album, you can check their Facebook page.

Listen to the song Voices of War here!