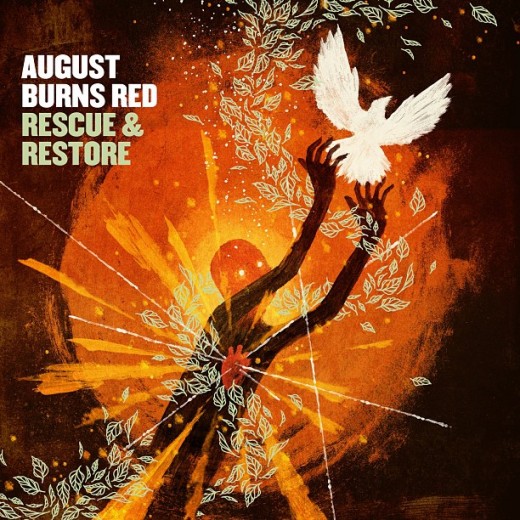 If there is one sentence that I’ve heard too often from bands it’s: “this new record is the best one so far, etc etc”. More often than not, this promise is not kept. In the case of August Burns Red‘s new release Rescue & Restore however, it is more than just true…it’s an understatement: their fifth album is nothing shy of an absolute masterpiece.

In their early days the band were a pretty standard metalcore band, a good one admittedly, but with their third record Constellations they slowly started expanding their sound. Number four, Leveler, broke new ground with the occasional addition of certain atypical instruments and polyrhythms which added a certain epic feeling to their music. However, their newest endeavor goes even further and broadens the entire spectrum of what metalcore can be.

The guitars and drums are absolutely insane and I can guarantee you that you will find new licks and fills each time you re-listen to the eleven songs. While that has already kind of been the case on the predecessor, it is even more pronounced this time around. The same goes for the use of unconventional instruments…I’m not sure if I managed to identify all of them correctly but here is a, possibly incomplete, list: marimba, trumpet, flamenco guitar and violin. I am aware that this sounds ridiculous when you read it…but it fits so well into the song structures that the ingenuity is hard to deny. But you will have to be judge of that for yourself, I for one completely dig it.

The vocals have not changed a lot, nor has the production value: both are still at extreme high level. There are now certain spoken word passages that help quiet the songs down and thereby make the sonic array more diverse during these forty-eight minutes. If you know the band, you know that their lyrics are generally-speaking influenced by their faith without them being too much “in your face” about it. This has not changed, which I welcome because they are a major part of what ABR is all about.

All in all, as mentioned above, I’d say that this is definitely the band’s strongest record to date and I can only recommend every metal(core) fan to give it a go. One thing’s certain: June has brought forward another strong contender for my personal top 5. You can find more information about the band on their Facebook page, and you can listen to a song below. And just because I can: this has been my fiftieth music review, here’s to another fifty!