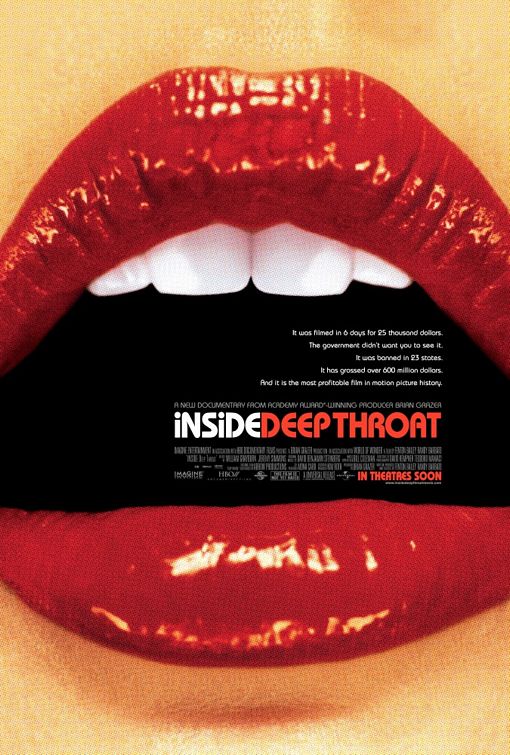 It was written and directed by Gerard Damiano, a former hairdresser who was inspired to make blue movies because he kept hearing sexually frustrated wives complain about the lack of intimacy in their relationships. He came up with the simple but revolutionary plot for Deep Throat after witnessing his leading lady’s special talent, an oral sex technique he deemed unique enough to build an entire picture around: Linda Lovelace, who plays herself, consults a doctor about her perpetually unfulfilled sex life. When he examines her, he discovers that her clitoris is located in the back of her throat, generously offers his help, and the rest is history.

In Inside Deep Throat, Fenton Bailey and Randy Barbato examine the reasons behind the film’s success and its tremendous impact on American society with the help of some members of the cast and crew (including Gerard Damiano and stock footage of Linda Lovelace herself) and other interviewees like John Waters, Larry Flynt, Ruth Westheimer and Hugh Hefner. It focuses on the controversy and witch hunt surrounding the pop culture phenomenon that was banned in 23 states and nearly got Lovelace’s co-star Harry Reems arrested for five years on obscenity charges, and aims to illuminate both sides of the coin.

PORN! At what age did you come into contact with it? I was born in the mid 80s and when my friends and I entered puberty and became interested in something we had no idea of, namely sex, we had no Internet (or only a very few of us) and so we gathered our initial impressions from stolen magazines, because no one had the guts to pay for them. Another source of information was the French Canal+ channel (for the real stuff) or DSF’s Sexy Sport Clips (for the softporn stuff) from Germany. In order to get access to those, we had to wait until our parents went out with some friends in the evening, stay up late and not fall asleep before mom and dad returned. A few years later, when computers became more popular, suddenly this guy who had a CD burner and provided everybody with what was wanted and needed stepped on the scene (I am sure all of you knew a buddy like that back in the old days).

During the 90 minutes there is talk of a culture war between sexual revolutionists who claim to crusade for women’s empowerment and libido liberation, and the American right-wing politicians and government which outsourced the report of the commission on obscenity and pornography in order to justify a nationwide ban of Deep Throat. I think that the directors succeeded in capturing meaningful, exploratory, questionable and even suspect opinions and insights of Deep Throat in a very objective and journalistic way. If you are curious about the historical interest and cultural impact of the 1972 porn classic and different views/opinions of umpteen talking heads like Dr. Ruth Westheimer, John Waters and the usual suspects, you should give Inside Deep Throat a try. Personally, I got the feeling that the documentary overestimates Deep Throat‘s influence from time to time and never seems to take itself too seriously.

In my personal definition, a documentary should not only delve into one specific and cohesive issue but should encourage viewers to question what they have seen and inspire them to search for further information. Inside Deep Throat could have served as a perfect medium for an important subject like pornography. Unfortunately it doesn’t raise any questions and hardly provides a basis for discussion. To my way of thinking we need a sincere, realistic and public debate about how we deal with pornography, the portrayal of women in sex films and its influence and effects on the youth. There is no need for over-dramatisation but the democratisation of technology with the enhancing availability is responsible for the increasing consumption of pornographic material and this should not be belittled but simply thematised. An omnipresent subject like pornography and sexuality needs educational work. I am not saying that all this should have been included in the documentary but there were several occasions where the directors could have at least indicated the importance of some subjects mentioned above. To conclude, I was not disappointed by Inside Deep Throat itself but in the end I was searching for an introduction to my never-ending quest to seek new cinematic and socio-pedagogical paths, and that’s where the documentary can’t keep up with.

There is a lot to say about the porn industry and American censorship laws, more than could be put into a 92-minute documentary. I can see that. I’m sure the makers of Inside Deep Throat tried their best to turn the spotlight to adherents of the anti-pornography movement and let them address their various issues with pornography in as much depth as the limitations allow, but at the end of the day, it is very clear that we’re not really supposed to see eye to eye with the pious right-wing crusaders and radical feminists featured in the film. We walk away having learned that the American government bent over backwards to jail an individual for having sex on film — a ridiculous notion — and that’s about the bottom line here.

In reality, it’s not that easy, of course. It never is. And in that sense, Inside Deep Throat is a discussion starter more than anything else. I liked the documentary for what it is, a feel-good portrait of a film that sparked great controversy and paved the way for an awakening industry, but the most interesting questions remain unexplored.

Linda Lovelace was an ambivalent figure who made a lot of conflicting statements depending on who she was talking to during her lifetime. Due to the frequent contradictions and reversals of opinion, it is impossible to figure out to which degree her accusations of rape and abuse are true and whether she really was coerced into entering the adult business. Sadly (and perhaps unfairly, as any educated being knows that it isn’t unusual for victims of abuse to return to their tormentors and continue the cycle of violence), she lost much of her credibility in the public eye when she once again turned to the porn industry several years prior to her death. It’s a classic “he said she said” situation and the most important witness is dead, which makes it hard to treat the case in a film supposed to stick to pure facts.

But even with that in mind, the way they handled it doesn’t sit well with me. Following archived footage of Lovelace testifying on talk shows alongside feminists, there’s Damiano offering his perspective in a few concise sentences:

And that’s it for Lovelace, basically. It seems like an exceedingly biased, flippant, dismissive conclusive assessment to me, and I would’ve liked to see one or two more statements to balance it out.

Furthermore, as Luc already pointed out, in spite of the fertile ground for extensive debate, the discussion on the ethics of pornography is kept relatively shallow. The documentary scratches the surface, but definitely doesn’t spend much time analysing the more dubious and problematic aspects of the industry that Deep Throat practically unleashed. This may again be attributed to the lack of time and relevance to the central subject matter, but it still irks me. As author Erica Jong pointed out in her interview, the premise of Deep Throat is a little shady in itself. It caters to a male fantasy, the idea that by thrusting their penis down a woman’s throat, she gets as much pleasure as they do — and in retrospect, it seems like a foreshadowing of the direction in which heterosexual pornography is currently facing. It is based on male fantasy, which is interpreted as fact, so the expectation of the women involved is to conform to this fantasy. These dynamics, too, ought to be questioned and properly addressed and not merely touched on.

Watch the trailer below and give the documentary a try if you come across it. If you have already seen it, please tell us your opinion in the comment section.