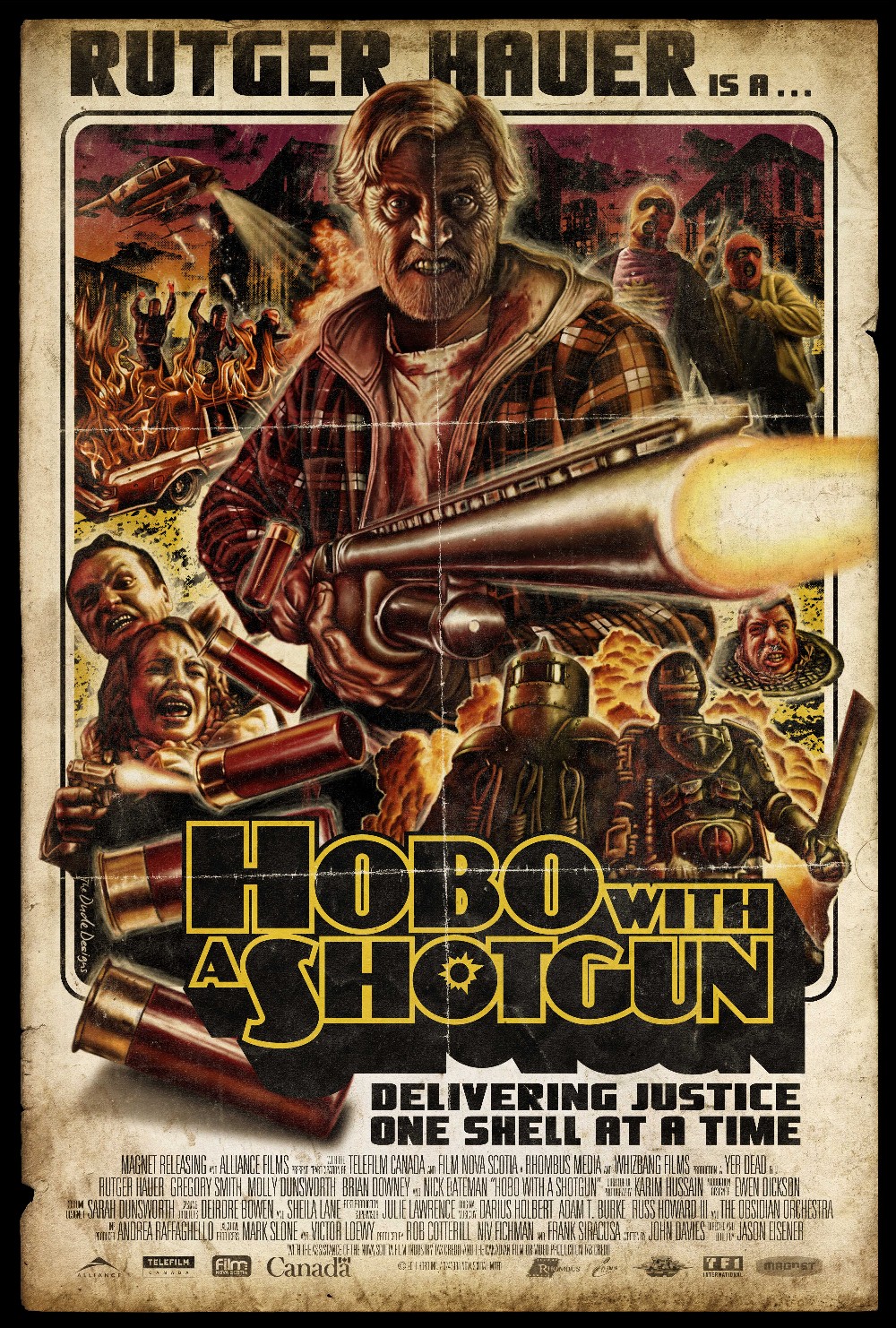 Hobo with a Shotgun. Here’s where the film already scores points with me: there’s no need to carry out the tedious, boring task of covering the plot because the title sums it up nicely. It started out as a fake trailer that won Robert Rodriguez’s SXSW trailers contest and went on to become the second Grindhouse trailer to be made into a feature-length, high-budget film. The project was realised by director Jason Eisener and writer John Davies, two of the Canadian guys responsible for the fake trailer.

With a top-notch Grindhouse trailer to compare it to, it’s easy for the feature to miss the mark in the eyes of many fans. Case in point: the first attempt. After sitting through the disappointment I thought was Machete, I went into this experience with mixed feelings, and came out pleasantly surprised.

First of all, I think the premise is about as fantastic as it gets for a brain-dead action film: a hobo with a shotgun goes on a bad guy killing spree in a town, ironically called Hope Town, which runs on rampant crime and corruption. Rad. Then, it must be noted that Rutger Hauer is badass enough to make up for a lot of this movie’s faults. The man’s piercing blue eyes reach right into your soul, and his portrayal of the mellow hobo just minding his own business gone borderline maniacal vigilante is near perfect.

A notable characteristic of Hobo with a Shotgun is its colour palette: high-contrast, stark and oversaturated, adjectives which also apply to the movie as a whole. The dazzling colour scheme gives off comic book cover vibes and goes well with the film’s general over-the-top nature — I’d even go as far as to say that it is an integral part of what makes it work for me. The flashy shots indicate that its chief aim is not to be deep and heavy with meaning, and yet it still manages to raise questions of ethics while avoiding the classic exploitation genre trap of degenerating into masturbatory self-parody. It goes without saying that it’s not exactly an enlightening social commentary, either. But overall, I get the impression that aspirations line up with the outcome here, which I think is vital when it comes to movies of this gratuitously gory caliber.

Content-wise, I thought it was wholly decent, if a bit hectic and overstated. I probably won’t ever think about, let alone watch it again, but to accept long-term influence on my life as the universal purpose of movies and the benchmark by which their worth should be measured would be misguided. In order to enjoy Hobo with a Shotgun, you must see it for what it is: a film that tries to entertain largely by means of violence that is absurd to the point of hilarity. You get the gratification of sweet revenge by the “eye for an eye” principle, and though we all know, at the core, that that would be a horrible way to fight a corrupt system in the real world, it is kind of satisfying to watch the wooden bad guys get slaughtered on screen. If that doesn’t sit well with you, you probably won’t see much merit in this film, despite the sprinkles of heart and meaning it does contain.

The relentless energy and boldness of it is exhausting, though, so I was relieved when it came to a screeching halt after the explosive finale. My poor overstimulated senses were practically begging for a break after a good 86 minutes of shrill, glitzy, gore-injected craziness. If you plan on watching this one, which I won’t discourage you from doing, know that you’re in for one hell of a ride. And watch it at a time of day that allows for a few hours of visual impairment after.

2 replies on “Hobo with a Shotgun”