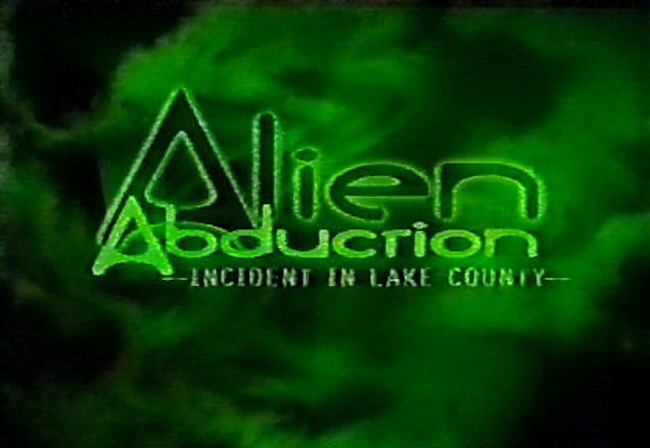 This is my first time ever reviewing a movie about aliens. Out of the long list of human-invented monsters and entities, I find our fabricated image of aliens to be the least scary and/or interesting, so I don’t seek out stories involving them. I am tired of seeing the same old pale inverted triangle heads parading around the earth with their long limbs, technologically advanced spaceships and shady intents. I have yet to see a movie that deals with them in an exciting way and doesn’t use the worn-out stereotype of the extraterrestrial tyrant with supernatural powers.

Sadly, Alien Abduction: Incident in Lake County does not challenge our idea of extraterrestrial life, either. But it did capture my attention because it is a straight to TV movie that came out one year before The Blair Witch Project and was marketed as real footage, as well. (By the by, the fact that this actually worked is hilarious. Aside from the fairly obvious movie mistakes, like glaring audio/visual asynchrony and the like, the makers included the alien actors in the credits.)

The film, which features interviews with all sorts of “professionals” in between the found footage, is told through the lens of a kid who wants to document his family’s thanksgiving get-together with his new camera. They’re all having a medicore time until the three brothers go out to check what’s wrong with the electricity. They notice strange lights in the distance, decide to investigate and end up witnessing a strange ritual performed by aliens in front of their spaceship. Things go downhill from there.

The acting struck me as substandard and very distinctly amateurish (except for the little girl, who managed to unsettle the ever-living hell out of me), which shattered hopes of the film feeling real and dangerous for me right off the bat. As entertainment, “okay” is the word I would use to describe it in a nutshell. Truth be told, this is far from the worst outcome. I actually do think it is suspenseful, and the alien intruders have some pretty creative methods to mess with the family. The psychological manipulations, especially towards the end, are seriously unnerving. I’d love to spoil a specific scene here, but I’ll keep it as vague as possible by revealing that people end up putting their tongues where they don’t belong, and it leaves you… puzzled. There are very few jump scares, which I appreciate, as well. The film tries to build to a climax of terror by using tension and subtly disturbing occurrences.

I’d say that watching Alien Abduction: Incident in Lake County can serve as a nice Friday evening pastime for found footage/suspense/alien fans. The movie is not groundbreaking or challenging in any way, but it’s one of the more tolerable alien flicks I’ve seen, if that counts for anything coming from an alien flick avoider.