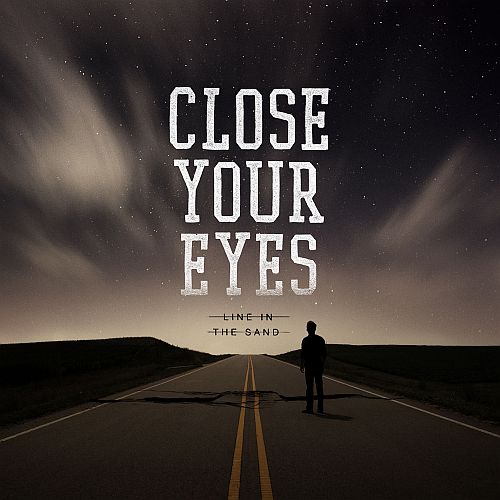 When I rediscovered Close Your Eyes‘ second record earlier this year and subsequently fell in love it, I looked up what the band was up to these days and found out that they were recording a new album, but with a new singer. Now, especially since the vocals played a huge part in me adoring Empty Hands And Heavy Hearts as much as I do, I was quite worried. But as I always say: change doesn’t always have to be bad, even for a change-fearing person as myself. Line In The Sand is proof for that.

The band has taken a step back from the melodic hardcore that defined its predecessor and gone back to the pop-punk-ish metalcore that was We Will Overcome, their debut release. While that style dominates on most of these fifteen songs there are some nice surprises like the hard rock-ish Frame And Glass or the bonecrusher that is Skeletons. These few deviations guarantee a non-repetitive experience, which is a definite plus.

On the instrumental side there is not much to say…it’s all flawlessly performed and demonstrates the songwriting that the band has perfected over the past three years quite nicely. A handful of riffs did, however, completely blow me away…because they simply didn’t follow the rest of the set-up of the songs they were in. The drums are, due to the style change, a bit more straight-forward than before but absolutely fitting.

Onto the big elephant in the room: the vocals. To be brief: the new bloke, Sam Ryder Robinson, does not fill the shoes that were left behind by his predecessor…he throws them away and wears his own, which is a definite plus. Let me explain: it’s always aggravating when a band specifically looks for a singer that sounds exactly like what they had before, since it prevents them from growing as a band, in my opinion, and it’s mostly fan-service. Such is not the case on LITS because, even though they have a similar timbre, the new clean vocals are more melodic and just better fleshed out. The other upside in the vocal department is that the backing growls by the bassist are more prominent.

All in all, I’d say that, objectively speaking, this third release is Close Your Eyes‘ strongest output. I have listened to it quite often so far and I suspect that I will do so in the future, however I’d say that their melodic hardcore stuff struck more of a long-time chord for me personally. I recommend making up your own mind which style of the band you prefer. You can do so by listening to the song below and check the band’s Facebook page. Have fun!