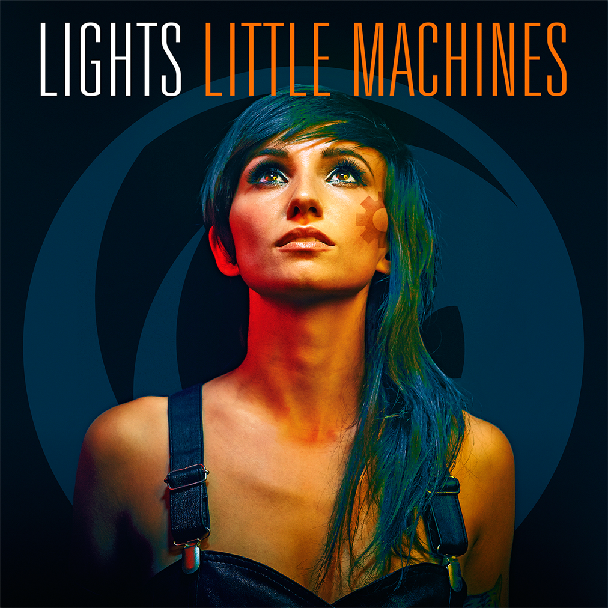 Let’s get one thing out of the way before we start: I don’t like pop. Generally-speaking, the pop industry is filled with one-hit-wonders that perform songs they had no input in and desperately try to appeal to the masses…just not my cup of tea. There is, however, one exception that goes by the name of LIGHTS. The talented Canadian singer has just released her third full length called Little Machines and proves yet again that pop can be highly enjoyable, diverse and, for the most part, self-written.

Three years after her second record, during which she got married and became a proud mother, the young singer has further evolved her trademark synthesized sound and reduced the dubstep elements that were predominant on Siberia. The genuine-feeling drive and the dreamy vibe that, to me, made her music so agreeable in the past is still present and, frankly speaking, it feels good to have new material.

The eleven song record opens with the song Portal which achieves a feeling of full immersion due to its hypnotic rhythm and softly sung vocals. And after that you are greeted by mostly upbeat songs that will not let you off the hook until the album is over. I do have to admit that on the instrumental side there are less passages that will be imprinted in your memory from the get-go, as was the case on the predecessors. But then again, I believe that the aim was not to necessarily create “hit material” but rather an authentic listening experience.

Truth be told, my personal selling factor about LIGHTS‘ music has and will always be her brilliant voice. Despite the usage of slight vocal effects and minimal pitch correction, they sound real and heartfelt…and if you’ve ever checked out her acoustic material, you know that the girl can sing just as perfectly without any computer help. On her previous records, I was always able to identify with most of the lyrics in one way or another and this is still the case, even though it’s not as strong as in the past. However, I dare you to find lines as cleverly written as during these thirty-eight minutes on any other pop record.

There is not much more I can tell you other than: even if you’re not a big fan of pop, or actually have a strong aversion to it, Little Machines is worth checking out because it’s not your run off the mill pop record. Watch the video to get an idea of what her music is all about and head over to Facebook for more information. And, even though I’ve said it before: always give music a chance, even if it’s not your home turf, because you never know what can touch you.