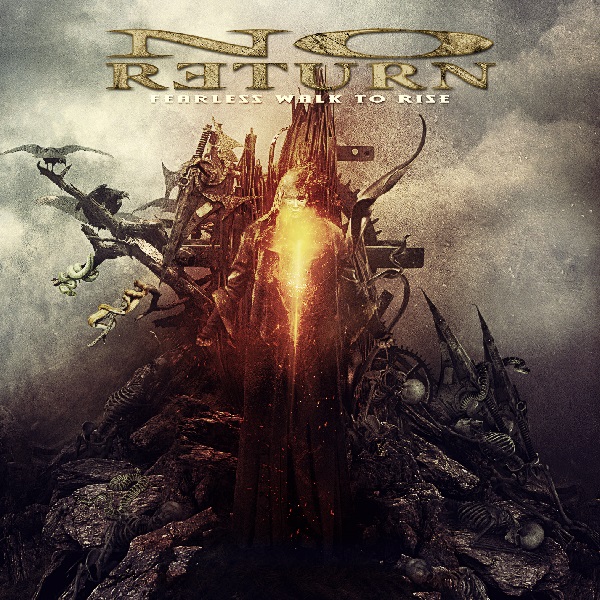 I’m going to be honest here…even though No Return are a fairly well-established death metal band that has been around for twenty-six years, I have never heard of them before. Which is why I won’t be able to tell you how well their new record Fearless Walk To Rise fares against their previous releases, but what I can tell you is: boy, does it rock!

The quintet plays death metal that definitely has old school roots, but doesn’t shy away from throwing in more modern, melodic, elements, which prevents the ten songs from ever sounding stale. The interplay between brutal riffs and devastating blast beats lends the tracks a lot of tempo and ferocity. On the other hand, you have groove-laden and truly melodic parts that infuse variety in just the right spots.

I get a certain Scandinavian metal feel from the music the Frenchmen play, mainly due to the fact that the song structures resemble those of the aforementioned genre and I personally don’t mind at all, because they absolutely nail it. The sheer mass of crazy-fast solos and technical goodness that is buried in these forty-seven minutes will certainly be appealing to returning listeners.

The only aspect that might be a bit difficult for some to get into, are the occasional clean vocals, or shouts rather, that are thrown in…especially because the French accent, that I personally adore so much, is hard to ignore in these passages. If you can overlook that small fact, the singer’s performance is top notch and he definitely delivers on the whole line.

All in all, as a first-time-listener, I can honestly say that Fearless Walk To Rise is a very solid death metal record, for fans of the genre as well as newcomers. I strongly urge you to give the song below a listen and visit the band’s Facebook page if you like what you hear, for more info on where to get the album once it’s released on March 30th!
[youtube https://www.youtube.com/watch?v=PM-QQcPJI3U]