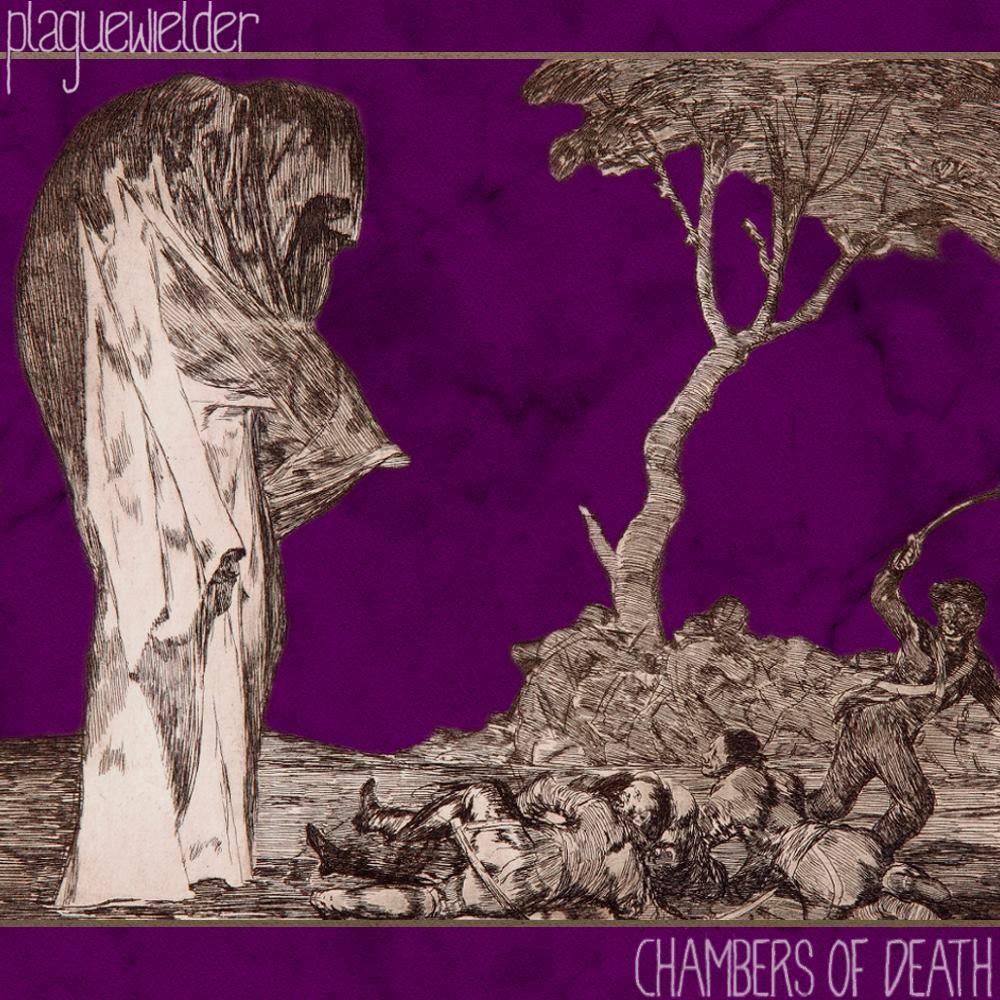 Even though the metal scene in Luxembourg is a presence that cannot be underestimated these days, there are some genres that are very scarcely represented. Doom metal is certainly one of them because, unless I am mistaken, there is only a single band that chose to invest their talent in it. That formation is called Plaguewielder and the guys are about to release their first album, which goes by the name Chambers Of Death.

Now, if you look at the amount of tracks, you could assume that it’s just an EP, but I must remind you that it’s doom metal we’re talking about here: forty-nine minutes of music await you! I have to add that three out of the five tracks are new versions of the songs that were on their debut EP, but since we haven’t gotten around to reviewing that on here in the past, it was a wholly fresh experience for me. Due to the low amount of songs, I’m going to do something I rarely do, but which I think is justified in this case: a song by song breakdown.

Existence Is Our Exile starts off with black metalesque screams of pure desperation, present on the entire record, before kicking it off with a powerful outburst which follows that same emotion. The soundscape is enriched by minor use of string instruments which fit the mood perfectly and give the song that extra something. About halfway through, the synthesized piano kicks in and, without really breaking the feeling of despair, drives the song into a completely different direction before reverting back to the main part to close the song.

The second song, Drowned, which remains largely unchanged from its former glory except for a handful of added vocals, is the slowest song on the album and the most basic one out of the bunch. While it’s nowhere near anything I would consider bad, it doesn’t have any of those surprise moments which I love so much on the other tracks.

The new version of Casket Of Dying Flesh follows, which takes a while to build up an atmosphere before the organ kicks in. Baring in mind that I hadn’t given the EP a listen before, this really took me by surprise since it fits so nicely into the concept of the song that I couldn’t imagine it without it. The melody of the organ just has this looney bin feel to it, which complements the lyrics so well…in case you’ve read them.

I’ll be straight-forward here: Father Suicide, the second new song, is by far my favorite on the album. The first half of the song is an almost post-rock-worthy barrage of fast-paced riffing and drumming, which conveys, to me at least, this feeling of total freedom but yet of deep sadness. The synthesized piano is the omnipresent instrument throughout the seven minutes and helps guide the song into its heavier part in the second half, which is on the heavier spectrum of the band’s sound.

The closing track, The Funeral March, is the longest song and at the same time a perfect way to close the Chambers Of Death. Its gloomy vibe is carried all throughout the almost fourteen minutes and even when the song picks up the pace, the depressing mood is not lifted, quite the contrary: it has this goosebump-inducing quality to it until the very last seconds.

That’s about it. Plaguewielder is a very promising band with loads of potential to be quite prominent in the scene, and definitely not simply because they are the only ones in their musical field. While I think it would have been welcomed by their fans if there had been more new material, I think the guys did the right thing by spicing up their old material, since it sounds so much more powerful now. Generally speaking, the production is just what it should be: clean but not artificial sounding in any way whatsoever. Be sure to visit the band’s Facebook page and do yourself a favor by giving Chambers Of Death a listen when it drops on August 25th and get sucked into (your) doom!