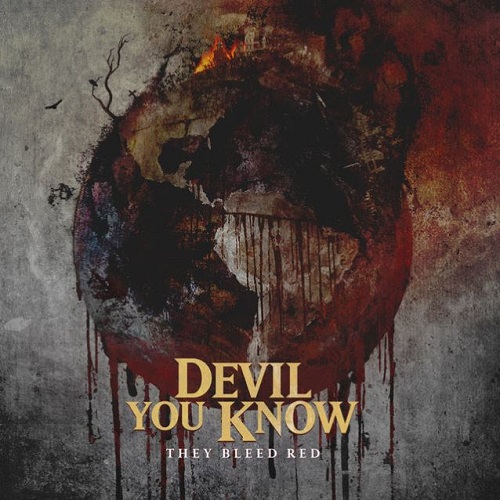 Quick fact about myself: ever since I got into Killswitch Engage around 2009, I’ve become quite a huge fan of their music. Naturally, I was a bit devastated when their singer Howard Jones left the band in 2012 due to medical reasons. It turned out to be be a blessing in disguise, when their original vocalist eventually returned to the band, but that’s the point of this story. Jones was officially no longer in the music business, and I was quite saddened because I consider him to be one of the most unique and strongest singers in metalcore. Fast forward to 2014, when I learned that the man himself was back with a new band called Devil You Know, who were about to release their debut record, The Beauty Of Destruction. Despite my high hopes for the record, I wasn’t really convinced by the instrumental side of it, since it was a bit generic and lackluster, only being above average due to the vocal performance. Little did I know that merely a year later, the quartet would surprise with a fresh album called They Bleed Red, which is the subject of today’s review!

After that lengthy introduction, I should really just cut to the chase: it’s a major step up from its predecessor! The songwriting has vastly improved and actually has numerous memorable riffs and hooks that embedded themselves in my head even after the first listen. The heavy parts are truly in your face and guaranteed to instigate many vicious moshpits as well as enthusiastic headbanging! The technical level has also definitely been raised, providing more than just mere background noise to the vocals. The same goes for the melodic side of these eleven tracks, which frankly has a much catchier aspect to it.

The fact that the production packs a by far fiercer punch than before is just an added bonus to these already neckbreaking forty-seven minutes. All this provides the perfect stage, so to speak, for the afore-mentioned vocal prowess present on this record. It goes without saying that HoJo nails it and actually delivers, what I feel is, his strongest performance to date. The amount of face-melting screams and growls on TBR just can’t be put into words, it’s that good.

To sum things up, Devil You Know have definitely saved face with their new record and proven that they are a force in the making to be reckoned with. At the time of writing this review I am, as a matter of fact, going to see them live in three days, so I’m twice as excited as before to witness their performance! Check out the song below, which admittedly is one of my least favorite on here, and visit the band’s Facebook profile for more info!
[youtube https://www.youtube.com/watch?v=vG8DzO1gJ4g]