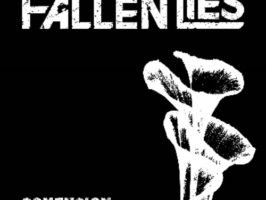 Alternative rock is, generally-speaking, a very interesting genre since it appeals to a fairly wide audience, but it can also serve as a gateway drug which leads its “users” to heavier music. However, those two things only apply if the music is executed correctly, and let’s be honest: more often than not it isn’t and leads to an, at best, average end product. Now, if you know me and my philosophy of not writing negative reviews, you’ve already come to the conclusion that today’s record is an example of how to pull off this genre correctly: Fallen Lies‘ debut Confusion does everything right and then some…let me tell you why!

If I had to explain to someone, who’s never heard of the band, what to expect I’d say that the quintet is Luxembourg’s answer to Alter Bridge. Now I know that using comparisons is always a lazy way of making your point, but if the shoe fits, it fits. The song structures share similarities and the riffs are also fairly reminiscent of AB; especially the opening of the third song, Neverending Mind, could be straight from Tremonti’s feather. However, while I’m at it, I will also add another comparative layer and say that at times I noticed a fine mist of Metallica influences, especially in the guitar department, which always spice things up at just the right time.

The drums and bass on the other hand both play for the song as a whole at all times, meaning that they never go over the top and always serve as the perfect backdrop for the guitarists and the singer. While the album is generally high-powered the entire time, the ten songs, of course, feature a ballad but I have to say that I enjoyed it quite a bit, since it never went into full cheesy territory and has an engaging guitar solo to round things off.

The vocal performance throughout the forty-five minutes is always solid and contains some very interesting melodies as well as catchy choruses. Furthermore, the vocalist also delivers a strong performance, but at times I felt that she might have been holding back during the recordings and I seem to remember the songs having a bit more oomph when I experienced them live. However, I would consider that personal gusto.

All in all, Fallen Lies have definitely managed to cook up a very respectable first entry in their, hopefully expanding, music catalogue and believe me when I tell you that, despite its title, this debut record will not leave you with feelings of Confusion. For more information, be sure to check out the band’s Facebook page and check out the song, which is one of my favorites, below. Sadly, the release show is already sold out…but I’m sure that you will be able to catch them live soon enough!