Without the incredible James Rolfe from Cinemassacre.com, I probably wouldn’t know this movie. In his great Top 10 Giant Movie Monsters video James puts Giant Claw on first place and leaves movies like King Kong, The Lost World, The Beast, Gamera and Godzilla behind. Even the Godfather of Stop-Motion: Ray Harryhausen was no match for it.

The Giant Claw is a Science Fiction film from 1957 and deals with a gigantic bird (17.000.000 years old) from an antimatter galaxy (!!) which comes to earth to nest and terrorizes mankind. Because of its power shield, the bird seems to be indestructible and invincible as it can’t be followed on radars. The monster can only be outflanked by a special type of isotope which manages to deactivate its shield and allows missiles to kill it.

If you think the story is already fucked up wait until you see the monster! The bird is really, and I mean really, poorly done. You immediately recognize a marionette puppet and sometimes you even see the wires. I can’t find any more words to describe it. Let me show you a picture and you know what I mean: 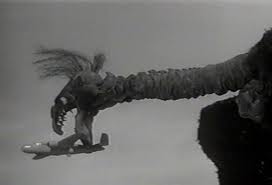 Directed by Fred Sears, this movie is not to be taken as an earnest monster flick. Even though special effects from Ray Harryhausen’s movie Earth vs. the Flying Saucers were used, King Kong, 24 years earlier, was scarier, more realistic and done better as The Giant Claw.