It’s no big secret that I’m a big football fan. When it comes to my favourite team I even tend to become politically incorrect. And as a matter of fact I love playing football games.

Choosing the right football game is like choosing which party to vote when there’s a turd party and a clyster party. Long story short, between the FIFA and the PES franchise the only common denominator is that none of both are perfect football simulations; all having their pros and their cons. I chose PES over FIFA because, to me, the game had a more realistic approach to my football knowledge hence the inferior graphics and mo-cap. This years release features Active AI, this means your teammates have a better understanding for the game you play and for example defenders that support the winger on the “corridors”.

I always thought of FIFA of being a closed, scripted experience with big flaws in ball physics and AI but then, it’s THE game that’s got almost every league licensed and a better support on bug fixing and so on. On the other hand PES has a better tactics editor which makes FIFA look like a football game for babies.

The best PES release how so ever will still be PES 6 on the PS2, as it was a fast paced simulation of kick and rush with the overall feeling for a “everything is possible here” mentality. But then came the current gen consoles and that’s when Konami screw it completely. The next releases became all known for being bloated bug-ware, not to mention the completely debilitated AI and the stiffness in the players movements.

When I grabbed the demo on my Xbox for this years release I was pleasantly surprised. The controls improved a lot, with the players being more flexible and more responsive and the biggest improvement I’ve noticed directly was that each player tried to get the ball no matter how far or close the ball was, something that had to be fixed after PES 2011 where players didn’t even intervene when the ball rolled a few millimeters past their feet. Yes, that game sucked that much indeed.

But after my initial euphoria for PES 2012 came the great disillusionment. Konami did not succeed in releasing another milestone in football simulations.

At first I thought my controller was fucked but then I noticed what was going on with the game. When you’re playing with the 1st controller on the XBox your selected player is not WILLING to run for more than 10 meters without stopping for a short period of time. This means, if you’re doing a quick counter your striker will not run towards the goal with lightspeed, but stop every now and then with no apparent reason to do so! Just google for “PES 2012 XBox Stutter bug”.

One can say that this is a bug that will be fixed directly but the game’s been out for over a week and nothing has been done yet to fix it.

What’s the point of a developer team having a section for sports games with PES being the MAIN franchise they are working on full time when obviously there’s no one there to test the game on all platforms before releasing it? If for example Polyphony Digital had released Gran Turismo 5 with a bug that forces your car to push the breakes every 5-10 seconds the users would go apeshit on the internet and Polyphony had their name ruined for a long time.

Not so for Konami. Ever since the PES franchise moved towards current gen consoles the games were doomed to fail because of the huge amount of bugs that affect the overall gameplay experience, with the stutter bug being the tip of the iceberg.

I could mention that PES 2012 features the Liga Portuguesa for the first time in its history, but when the only licensed teams are Porto, Benfica and Sporting; I really don’t think that this new feature is noteworthy.

For the non-existent German League you can choose between Bayern Munich and Bayer Leverkusen. Yeah…

And this is the next point that pisses me off! What’s the point in featuring a new league when 13 of 16 teams have fake names and logos? Why is there still no Bundesliga featured in PES? Considering the current financial situation in Portugal and the popularity and relevance of the portuguese league in the world of football I do ask myself if Konami did not have enough budget or arguments to license the portuguese league entirely. I’m pretty sure the portuguese federation asked millions and bazillions of euros for the license…

PES2012 had the potential to become a next PES6 for me, but demonstrated once again that Konami does not have enough knowledge and consistency to compete with EA Sports and their FIFA franchise.

I think that the US cover for PES 2012 resumes the skills from Konami. All hail Cristiano “Thalidomide” Ronaldo.

Conclusion: I can not say that I’m disappointed as that would be a compliment 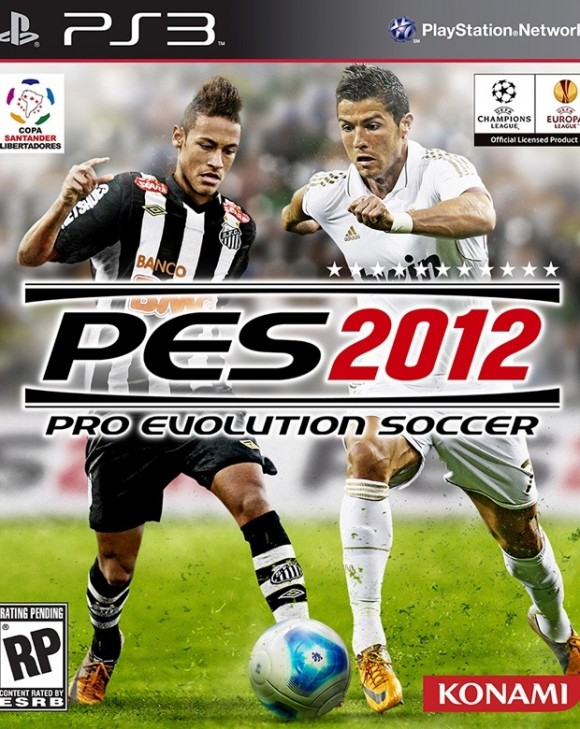