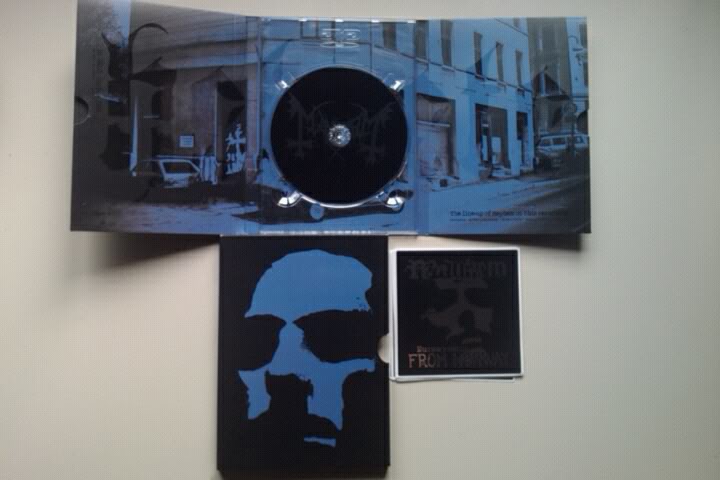 First things first. I have been listening to Black Metal for a couple of years now, but I don’t give a damn about any kind of scene or about being trve, kvlt, frostbitten or whatever else there is. I do not care about Varg Vikernes’ political views or his world outlook. I do not support fucking church burnings (even though I think that religions are brainwashing institutions which detain people from free-thinking) or stupid murders. I am not a close-minded idiot who rejects everything but Black Metal but damn I love this crazy shit from the early 90ies.

Let’s switch over to the record now. Life Eternal is an EP which contains rough mixes of 5 songs from the great De Mysteriis Dom Sathanas record, which was released back in 1994. After Euronymous was killed, Attila lost all contact with Mayhem and De Mysteriis Dom Sathanas became a bestseller. The only “souvenir” the vocalist had from these times were the 5 rough songs he recorded for himself in the studio. Attila claims that these songs, even nowadays, always bring back strong and dark emotions and that he wants to share his feelings with the fans. After years of fighting for the rights of the record, he released this 3,000-copy limited A5 digipack EP in 2009, in co-operation with Season of Mist and his own label.

What makes this EP so special? There are a few things. First of all it’s the whole getup. The record doesn’t only come in a nice A5 format, it also includes 10 stickers, very rare or even unreleased pictures, letters and lyric sheets. The most interesting about the album are Attila’s vocal performances. He probably already had an idea of how the vocals should sound, nevertheless he tried out different styles and singing techniques in order to decide which one suited best for the different songs and overall atmosphere. It is not always that easy to hear differences between the songs from De Mysteriis Dom Sathanas and the “original” but if you sit down and listen carefully you make clear distinctions.

Talking about differences you notice that Hellhammer’s drums on the Life Eternal EP are much more passive and in the background. I personally don’t like drums which are too present. This record also contains a Funeral Fog drum intro, which was cut out later on the “official” release. Looking at the guitars, I come to a similar conclusion. I like the guitars on the EP more, they are grungier and harsher, which support and underline and even perfect the extreme dark and dissonant atmosphere of Mayhem‘s sound and music.

People often tend to say that the fact of being a legend is larger than Mayhem’s musical accomplishments. With albums like De Mysteriis Dom Sathanas, Mayhem – Live In Leipzig and Life Eternal, they easily convince us of the opposite. This record is pure evil and I don’t care if this release has been put out to profit from the band’s popularity or not. I personally think that Life Eternal is one of the best and most interesting records in the history of the band.