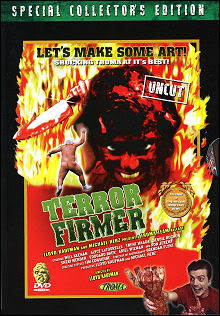 First of all a big Fuck You to the censorship in art and mainly to the German paranoid idea of cutting every horror / splatter flick. You guys have no leitmotif you are following and you have no idea what you are doing to the art. What the hell is the point in censoring adult horror movies. It is like cutting out the fuck scenes from a porno flick, it simply doesn´t make any sense. Authorities think that a funny Troma movie can be harmful to children and adults but have no scruple of showing a film of Saddam Hussein‘s execution, a blood-covered Gaddafi with a bullet in his head, real-time war scenes etc etc. Just make the movies not available for children (I think that should be part of the common sense) but stop killing art. Amen! 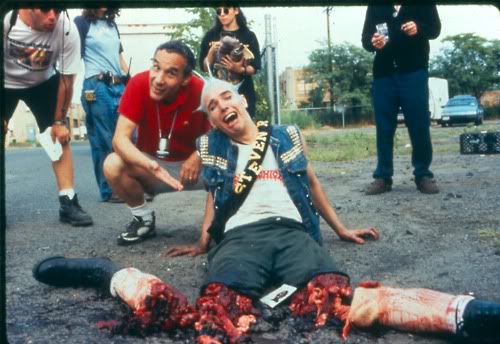 After the “Toxic Avenger” review, I promised Lloyd Kaufman writing something about his most personal movie “Terror Firmer“. So what can be said?! I think that this flick, which was released in 1999, is 100% pure tromatic madness. The story, inspired by Kaufman‘s book “All I Know About Filmmaking I Learned From the Toxic Avenger”, is kept simple and basically can be described as a Troma flick in a Troma flick.

Uncle Lloydie himself plays a blind (!!) director, named Larry Benjamin, who tries to direct a new part of the “Toxic Avenger” series. Sounds pretty easy?! Well it isn’t, because the whole film crew is a bunch of sex addicted hillbillies who are chased and killed by a crazy, “sexy” serial killer. While the movie consists most of the time of perverted, grotesque, brainless, gory and hilarious pictures, the story centers more and more on the love triangle between the production assistant Jennifer, the  boom operator Casey and the special effects operator Jerry.

“Terror Firmer” is definitely no mainstream movie but it manages doing something a lot of mainstream movies fail in. It is pure entertainment and that for nearly two hours. Lloyd Kaufman accomplishes this by falling back on the really dark, weird and even sometimes disgusting Troma bad taste. You shouldn´t expect anything more than a masterpiece of violence and fun. What I really appreciate is the overacting of the actors, who seem really enjoying doing this movie. Furthermore I really enjoyed the excessive and completely surrealistic and random use of viscera, blood, vomit and other egestas, which even tops most of the other Troma releases.

If you think now that “Terror” Firmer” is only build up on extreme violence based on a fucked up story with a killing hermaphrodite whose father is a deformed and dismembered Ron Jeremy (!!!), I can calm you down. In order to keep the flick interesting for everyone, Kaufman has put exorbitant amounts of sex scenes, tits and nudity into this movie too.

Finally, I think I should end the review best by quoting Kaufman himself, as he said: “I take it very seriously. I don’t take myself seriously but I take making movies very, very seriously (…)”. This quotation resumes 100% what “Terror Firmer” and Troma are all about.