2 weeks ago I went to Turku/Finland to participate in a workshop which dealt with the very important and imminent subject of youth unemployment, its social-economical outcome, the vast variety of causes and the different possibilities of prevention. It was great to see how other countries (try to) tackle this subject and to discuss different point of views and ideas. When I came back my limited ultimate edition of Battle Royale just arrived and my first thoughts were that this movie would have been the ideal workshop opener in Turku.

For those who still do not know Kinji Fukasaku’s masterpiece, which bases on Kōshun Takami’s book, watch it and try to think beyond the simple brutality. 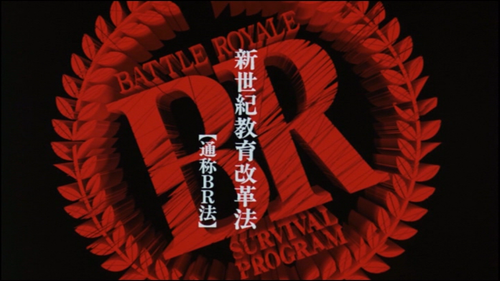 The story takes place in the turn of the millennium with dystopic Japan facing 15% of people being unemployed, a high rate of youth unemployment, poverty and criminality, in three words: an economical depression. In order to fight these circumstances on a political, social, ethical and moral level, a generation gap arises and the destructive adults, who have lost all their faith, don’t know how to help themselves as by creating the millennium education law (Battle Royale), a perverse state-sponsored anti-youth game, where the government sends a school class to an abandoned island with the rule that the youngsters have to kill each other until the last man standing.

I read somewhere that Battle Royale can be seen as a synonym of multiple allegories of a confused and deranged society. I completely agree with this statement because the movie, cynically, scrutinizes a lot of different aspects of people’s helplessness due to a broken-down system. 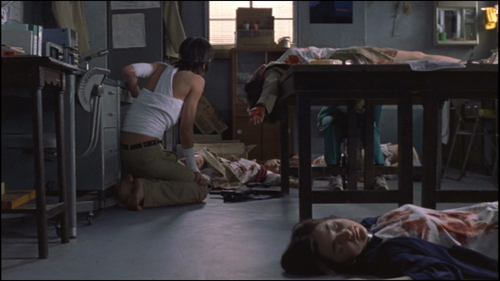 Fukasaku also raises a lot of philosophical and social-critical questions like academic pressure in relation with recession, group behaviour (friendship, trust and egoism) in futile situations, surveillance and entertainment through the government, media and reality TV; but he most of the time leaves the answers to the audition. Although the movie exaggerates a lot, I really do appreciate the acting. I think that the young actors are very credible in playing with all kinds of different emotions. They are only topped by Takeshi Kitano, who in my eyes is the anti-hero in persona and one of the best actors I have ever seen.

Battle Royale is a profound movie completed by its amazing soundtrack. Music plays a quite important part in Asian movies but this one underlines every single moment of the story in a perfectly amazing way. The music was composed by Masamichi Amano and recorded by the Warsaw Philharmonic Orchestra. Own plays just as Verdi’s Dies irae, Strauss’ Donauwalzer, Schubert’s song Auf dem Wasser zu singen, Bach’s Ouverture D-Dur BWV 1068 and the Radetzky-March make this soundtrack something really special, even without watching the movie.

To conclude I just want to add 2 interesting information. First of all something not that surprising: There was a remake announcement for 2008 which should have been done by Neal “FFFF (Fucked-up Fast and the Furious Franchise)” Moritz. Hopefully nobody will ever get the chance to do a remake of Battle Royale. Second, beside Kitano’s character (I have the strong feeling that he plays himself), I particularly do like Chiaki Kuriyami’s acting. Here it seems that I am not the only one, because Tarantino casted her for the role of Gogo Yubari in Kill Bill Vol.1 three years after Battle Royale. 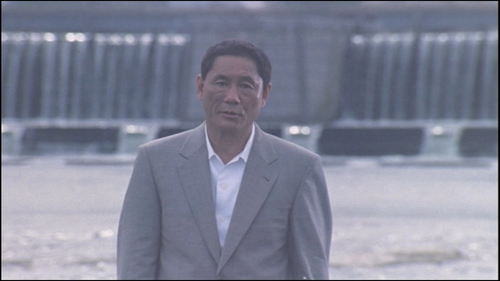 As for me, I have seen this movie for over 10 times and I could re-watch it all day long. Battle Royale is one the few “ten out of ten movies”.