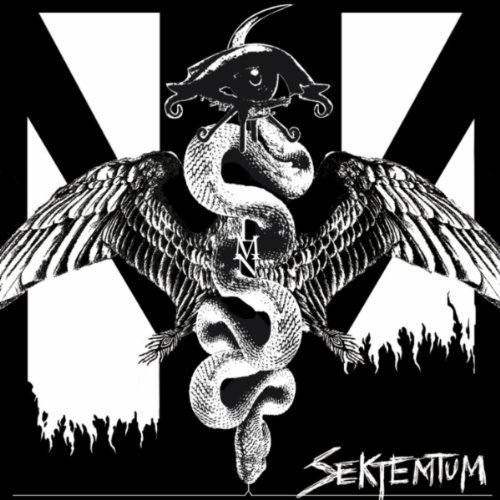 Formed in 2009 and including members as well as former members of such illustrous bands as Mütiilation, Ad Hominem, Arkhon Infaustus, Hell Militia, Gestapo 666 and Zoldier Noiz, Sektemtum, according to the band, stands for “the gathering, the sect, the twilight circle, the end and the beginning”, while the title stands for “either Caesar or nothing”, or more generally “all or nothing”.

The album starts slow, a simple Rock ‘n Roll riff paired with a few bends, not too far removed from the beginning of Darkthrone‘s Rust, off the misunderstood and underappreciated Hate Them album. The first shock are the vocals. Is this really Meyna’ch? He has never sounded this clean, yet at no moment does he not sound menacing. The music is very riff-based, which is also a departure from Mütiilation or other past bands. Meyna’ch loves traditional Metal, many pictures show him wearing Motörhead shirts, and he seems to fully embrace it here. Even with that in mind the simplicity of the music still comes as a surprise. Even more so if one keeps in mind who Meyna’ch is and what his last ouputs like Mütiilation, Hell Militia and Gestapo 666 sounded like.

Every song has a chorus or random vocal lines that stick with you, I found myself humming the opening riff for days, forcing me to listen to the album on a daily basis.

Many riffs are rooted in traditional Heavy Metal, solos can also be heard throughout the 10 songs and overall the structures are very traditional. Each song shows strong musicianship, not surprising at all, yet worth a mention. The production is very clean and warm, far removed for early Mütiilation.

At times Meyna’ch sounds like Attila, humming, whining, cursing, screaming his way through the songs, and Mayhem is the only comparison that comes to mind. No, I am not comparing this album to De Mysteriis Dom Sathanas, yet many elements are the same. The clean sound, the drums being allover the place, the Attila-esque vocals, the traditional elements.

This album, while being clearly rooted in Black Metal, has a lot to offer to fans of different genres as well as to those who just love intelligent music. The album has a natural flow, each song goes nicely into the other and no song seems out of place, yet eery song adds a different element to the whole picture.

I can only hope that the band will carry on, Sektemtum stir things up a bit with music that will piss off elitist Metalheads living in the past or scared of experimentation. The message is very clear to me, they do not care and they do what they want, and that in itself is the essence of Black Metal. It all comes down to the music and in the end it should not matter if this is Trve and Kvlt, it just is great music.

Be sure to check out their Facebook page as well as the afore-mentionned clip below.
[youtube http://www.youtube.com/watch?v=karDU2TpDT0]