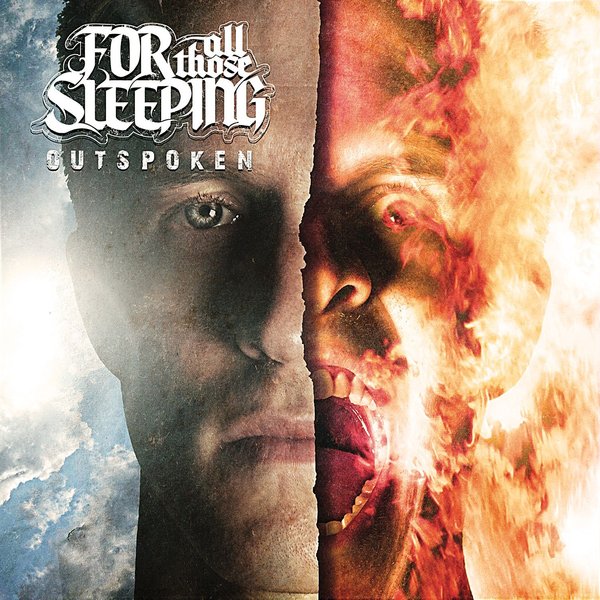 For All Those Sleeping from Minnesota is yet another band that doesn’t seem very well known in Europe, and I don’t really get why that’s the case. In 2010 they released their debut album Cross Your Fingers which had a very pop punk-ish feel to it and which I thoroughly enjoyed. Even though some people might argue that it was rather generic in the musical department I can’t really claim the opposite but the whole record was kind of a concept album which featured zombie inspired lyrics and it had quite a few musical highlights to it.

But it doesn’t really matter how you feel about their first endeavor since their newest record Outspoken, in my opinion, tops it in every single way. But let me backtrack a little here: in late April F.A.T.S. released the first single Mark My Words off of it…which left me with a slightly bitter taste in my mouth since I was rather underwhelmed. Fast forward two or three weeks to where they released the second preview song Once A Liar (Always A Fake) and I can tell you that by this point I was positively stoked for the release of the album.

When I finally got my hands on the full release I was greeted by one of the coolest intros in recent times (as well as a pretty cool artwork) and from there on I was completely immersed into the album. The first thing that struck me was the change in the quality of the production in comparison to their first record: the drums sound richer yet not overproduced, the guitars are sharper and heavier, and the vocals are even fuller than previously.

Lyrically the album deals with more general or generic, depending on your point of view, themes such as teenage angst, love and love lost. Yet they seemed a bit better thought through than the ones on the predecessor and feature more sing-along parts which luckily don’t strike me as too cheesy as is sometimes the case with metalcore songs. In the musical department they also added certain small touches, like violins and more dominant keyboard parts, which spice things up nicely.

All in all, I can only say that the Outspoken 40 minutes have not disappointed me, even though two of the twelve songs are a bit weaker than the rest. Ironically, the first single actually grew on me since it fits nicely into the album as a whole but the strongest song, to me, is by far Follow My Voice and I hope to experience the band live in the near future so I can go nuts to it.

Be sure to check to check out their Facebook page for more information and give my favorite song off the record a listen.