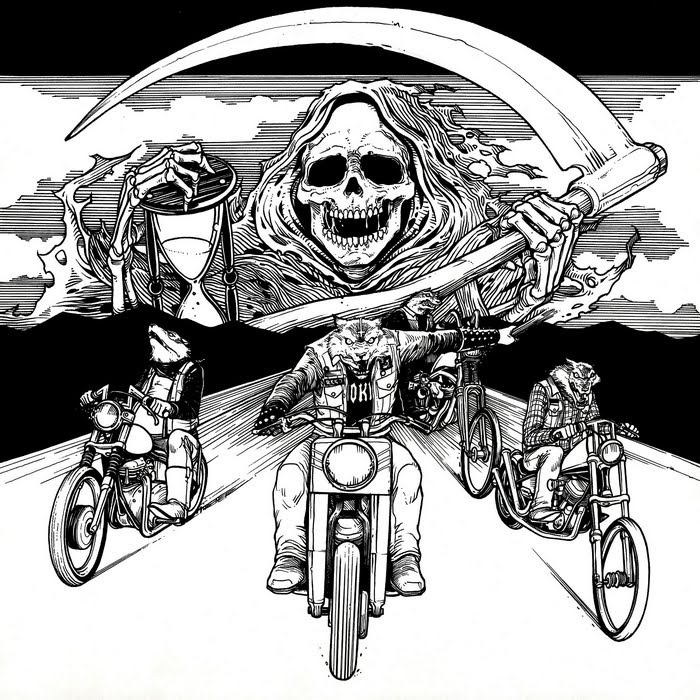 To all fans of Speed Metal and/or Motörhead, look no further! Speedwolf hail from Denver, Colorado and released a low profile single and Split with Hookers before turning into the greatest Motörhead tribute band ever. No seriously! Listen to those vocals! Give that guy a bottle of Jack a day and in 5 years he will have his Lemmy perfected.

This is their first Full Length release, but they just released a Split single with Nekrofilth (I did not get my copy yet, but will review it as soon as I get it). I am not familiar with their earlier releases but all the songs can be found on the album so I doubt that they changed drastically. This band worships the heck out of mid 80s era Motörhead and do a damn fine job at bringing that sound to us mere mortals.

My favorite era of Motörhead is the speed fueled Orgasmatron era and that is exactly where Speedwolf (err…Speedwölf?) pick it up. Just listen to a song like Never Twice and tell me you do not see Lemmy singing this. I dare you! They are the best Speed/Thrash/Punk/Noise combo I have heard recently.

Now, just mentioning the Motörhead influence would not be fair. This band does not sound cheap at any moment. Many of the riffs sound like something Metallica would have recorded on Kill ‘em All. The riffs are actually the greatest thing about the band. They come up with tons of fast and catchy riffs. A lot of bands playing a similar style just rehash generic riffs or only have a handful of good ones, Speedwolf are the complete opposite. They sound like Motörhead from a parallel universe, a “what if Lemmy decided to sound like Metallica back in ’83” band. And the result is fascinating! It just is one of those albums you wanna listen to when driving around at night, or sneak into a party and blast at full volume once you fought your way through a bunch of uptight “I listen to every type of music but your type” posers. This album slays, ’nuff said.

Now before you rush out to howl at the Speedwolf, perfect…this is not. The vocals do get a bit repetitive at times. Especially towards the middle, but the band manages to get your attention again towards the end. Funnily enough it is Death Ripper, the only track on the album with a different vocalist, that reels you back in. Not that the song is great, but those different vocals catch your attention and you suddenly just pay more attention again. After that the album picks up again and some of my favorite songs (The Reaper, Ride With Death) are up. And as with every great album it is over before you get up to turn it off.

A special mention to all vinyl freaks: The Gatefold LP is housed in a nice glossy sleeve and comes with a Poster. Die Hards might want to shell out a few more bucks for the “Ultra” clear version.
[youtube https://www.youtube.com/watch?v=dBn0dmRKs-E]