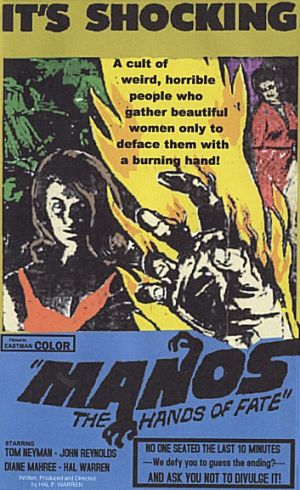 Before I start I have to point something out: Manos: The Hands of Fate is NOT the worst movie ever (this one it shall be). But it is pretty nasty too and I completely understand why it is recognized as one of the worst ever. I highly doubt that anyone involved in this movie knew something about film. The story is completely boring and makes sense only half of the time.

In short, Manos is about a family getting trapped by a polygamous fucked-up cult (I wonder if the members are neighbors with the charismatic chainsaw loving incest psychopath family we all know from another movie). While the cult weirdos are arguing about what they should do with the family, the latter one constantly tries to escape. Even though the story is boring as a porn movie without a donkey, it is by far not the worst. Ok, there are important illogical and redundant scenes which sometimes seem to be completely isolated from the main story (check out the master’s bitches breaking out into a silly fight, which reminds me of the silent film era). In Manos: The Hands of Fate it seems that they forgot the sound-effects or simply weren’t able doing multitasking, so they had to choose between the effects and the music.

Talking about music, I have never heard such a miserable, pseudo free-jazz shit in my whole life, needless to say that it is completely unsuitable and miss-placed throughout the whole movie. Not even that the music completely sucks, there are also many volume disparities and synchronization mistakes between the music and the so-called dialogues, which puts me on edge (it is said that the used camera wasn’t able to record any sound, so everything was dubbed in.)

Actors and dialogues suck big hairy monkey balls, both are completely implausible and abysmally bad. Even the body and especially facial expressions don’t fit to the different vocal tones (emotions) or are very hard to interpret.

Manos is really a pain in the ass and I am not even talking about the utterly bad camera work (check out the filming while the family is driving in their car!). If you chose to work with a 16mm Bell & Howell model, you definitely should know something about editing and cutting.

Finally I am very happy that the movie isn’t a serious attempt in creating something artistic as it only was a result of a bet.

Manos is a public domain movie, so you can check it out everywhere on the web. Thanks God for that!!