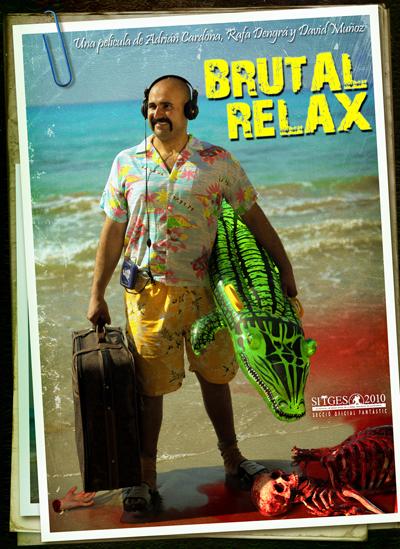 When I organize a typical (el) gore/horror movie night I usually start with the amazing Staplerfahrer Klaus in order to create the right atmosphere from the beginning. Since a few weeks this classic short found its coequal “opponent” called Brutal Relax.

In the same way as the movie title does not make any sense, the movie as a whole is completely preposterous but outrageously entertaining and I still have to admit that I did not like it when I saw it the first time. This has most definitely something to do with the aqua mummy zombies with whom I still have a problem but which now has become less dominant. But also because of the CGI effects (No, I won’t write about them because I already have done this in a lot of other reviews.)

When it comes to short movies in general there’s most of the time a positive and a negative aspect. First they are short (oooh really??). Yup, and I like that. There is nothing as annoying as a three hour long pseudo arty farty bullshit movie. A movie should be like honest grindcore and not like a fucking pathetic post-rock song. The problem is that there are only a few good gore shorties around. It seems that most directors are not able to focus and to create something really interesting with a high recognition value in only a few minutes. If I had to compare the short horror/splatter genre to music, I would call most directors John Petrucci wannabes trying to write songs for Anal Cunt. A comparison that doesn’t apply at all to Brutal Relax.

Back to the topic. The Spanish flick can be dissected in three parts and two of them ooze with blood. The first one explains the “plot” and is kept quite short with 3 minutes and a half. A Frisbee in a head initiates part two with zombies fighting, biting, dismembering, and drowning bathers. Part three is initiated by a walkman and malfunctioning batteries which makes Mr Olivares (I like the main character very much and he’s surprisingly well put across by José María Angorrilla) really angry. He then starts an overkill that reminds me of a Spanish Bud Spencer on speed and cloud nine.

Overall, the three directors, Adrián Cardona, Rafa Dengrá and David Muñoz did a really good job. For an independent movie there are not only amazingly innovative ideas but they most of the time are made in a very professional way. The camera work (especially in the second part) reminds me of Anthony Dod Mantle’s work from the 28 Days Later flick. Perhaps a homage but I guess that the decision also was made in order to cover up mistakes. In fact I do not care; thumbs up guys and keep up the great work. I am really looking forward to seeing more stuff from these three directors.