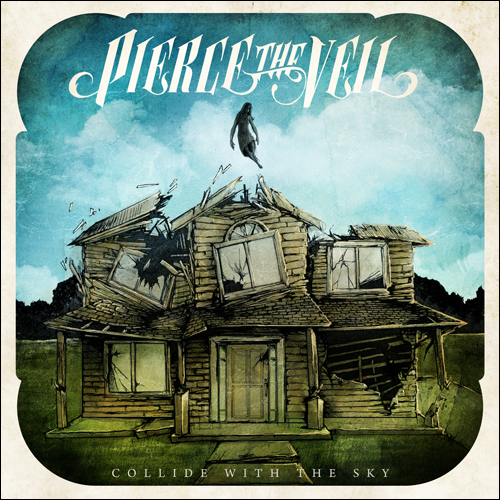 In October 2011 I went to see a show specifically for the opening band and they were worth every cent I paid. That band was Pierce The Veil from San Diego. Their by then already one year old record Selfish Machines had simply impressed me so much that I could not have missed that opportunity even if I had wanted to. I remember talking to their singer, Vic, back then and asking him about plans for a new record and he told me that they’d been working on some killer tracks and were supposed to go into the studio in early 2012. Fast forward seven months and there you have it: Collide With The Sky.

The band jokingly describes the genre they play as “mexicore” which is due to the fact that the Fuentes brothers, the singer and the drummer, are of Mexican descent and because they have many metalcore elements in their sound. However they are not your run off the mill core band that have released a good song or two and simply rely on their fanbase after that. No sir, to me the reason for their success is the purely amazing songwriting that they’ve proven ever since their debut album A Flair For The Dramatic. They seemingly manage to come up with melodies that have earworm-potential all the time.

This new twelve song album is no different because it gripped me from the second I put it on and hasn’t really left my eardrums since. The sound is very similar to the predecessor but that is a very good thing since I thoroughly enjoyed it for its clean and powerful production. One thing you’ll notice though if you compare the two records is that PTV have cranked up the heaviness knob quite a bit; which is another thing that I cannot complain about, at all.

The “riffage” is as usual on a very high level as well and even after the umpteenth time of listening through the whole record I’m still impressed. A lot of times I thought to myself that they sound like something a Mariachi band would play if they tuned their guitars to drop D and turned up the distortion. Might come across as negative but I personally love it: it’s simply an interesting mix of two very different genres.

The vocals might be the one thing that could scare people away at first because they’re very high-pitched and I’ve often gotten surprised looks when I told people that the singer is a guy. As for me: I’ve had the same reaction when I started listening to the band but I’ve since grown to admire his vocal range. You’ll just have to make up your own mind about it. Another thing that should be noted is that you should definitely pay attention to the lyrics since that’s another one of the band’s talents. Even though at first they all seem to have one thing in common, which is girls and problems related to them, they all have a deeper meaning and are a great read.

To round the whole record off the guys have gotten a couple of guest vocalists: Kellin Quinn of Sleeping With Sirens, Jason Butler of letlive. and Lindsay Stamey of Oh No Fiasco. I don’t want to lean myself too far out of the window but I doubt that any of them will ever regret lending their talents since all three songs they’ve performed on have come out phenomenal. Especially Tangled In The Great Escape with Jason Butler is probably my favorite song on the entire CD.

As you might have noticed I have not found any negative points about Pierce The Veil‘s latest endeavor and that is actually easily explained: to me it’s just the best album of 2012, at least thus far. There are still a few releases I’m looking forward to this year but those bands will have to work hard to convince me of the contrary. As always it’s of course best to make up your own mind about that which you can do by checking the video below and visiting their Facebook page for more info.