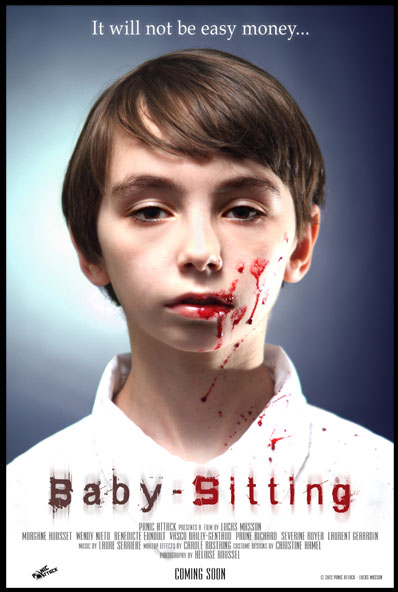 Hello world. It is Friday again and this time I really had my difficulties to choose a movie in order not to stick to these weird Japanese flicks I reviewed so often in the last weeks. While browsing through the internet I came across a very interesting movie title and auspicious trailer. Unfortunately I couldn’t find any further information or even the whole movie (yeah I download/stream stuff and if I like it I buy it). But as I said I couldn’t find anything but the director’s email address. What can I say? Well I think that I rarely have met such a straightforward dude on a “semi-professional” basis and that’s also why I wanted to try something new in order to not only do a review but combine it with an interview (which I feel needs to be extended).

After I saw Baby-Sitting for the first time there was one name which immediately came to my mind: Roald Dahl. I am not talking about Charlie and the Chocolate Factory or even Matilda, no I am talking about the wonderfully weird and macabre stuff he did. Comparing one’s work to Roald Dahl should, in the majority of cases, fulfill the idea of reviewing a flick but limiting Baby-Sitting to this fact just wouldn’t be fair because there is a bit more to talk about. First, Lucas Masson did an absolutely fantastic music selection, especially Freak In The City by Never Been is ear candy. Furthermore the actors, mainly the children, did an outstanding job with being very authentic, believable and completely nuts. At some point in the movie I was wondering if the boy could in anyway be distantly related to Paul from the original Funny Games. Masson so to say plays a lot with psycho horror movie elements but does it in a nice and fresh way. The psychological elements, being stronger in the first part, are than exchanged for a nice touch of gore and black humor in the second part. To conclude I have to admit that this guy has an extremely good sense of mixing all kinds of different horror elements in a very interesting manner.

Of course you should always have in mind that Baby-Sitting is a low-budget flick but considering the budget (with approximately 1600 euros) and the time (8 days with only filming during weekends) these guys invested, the result is even more surprising and it is no surprise that this movie already has been selected for 8 film festivals. Coming up next are a few questions I wanted Lucas Masson to answer, so keep on reading and tell us what you think about it.

El Gore: Something I really do appreciate is when a director decides to let people speak in their mother tongue. Personally I think that emotions are better put across and I always watch movies in the original language. Is this something you care about too?

Lucas Masson: Absolutely. I also only watch movies in the original language. I cannot stand the dubbed version as it takes away a big part of the actors’ performances.

For Baby-Sitting the choice was risky. Even though it is a complete French production, I knew that it would find better audiences in countries like England or the United states, where there’s a whole crowd of horror aficionados (of course we have a few over here, but French festivals aren’t big fans of splatter cinema). However the story took place in France so there was no point in making french actors speak English. It just made no sense. In the end I’m glad we shot it in French. And most of the festivals that selected it are from English-speaking countries.

EG: Do you plan on releasing Baby-Sitting on DVD and will we be able to see the full-length movie with 23 minutes running time?

LM: We’d love to but want to wait and see how it does in festivals and various competitions first. It will indeed probably include the uncut version since the 20 minute was made because of some festivals requirements regarding length. We also have quite a few behind the scenes videos which I feel are always interesting to watch when it comes to very small productions like Baby-Sitting so I’d love to put those in there too.

EG: You describe Baby–Sitting as a full dedication to the horror genre. What are your personal and professional inspirations?

LM: I’ve been a big horror fan ever since I was a child. My father showed me a lot of Horror and Sci-fi movies, so I grew up with them. I love all kind because I think the genre offers multiple storytelling possibilities. You can either tackle serious issues and develop very strong characters by confronting them with extraordinary events or having fun doing something completely over the top that people can watch for fun and guilty pleasure. For Baby-Sitting it was definitely the second option. As it was meant to be short and with a more than tiny budget, we wanted to make something simple, unpretentious with extreme dark humor and gory sequences. I was of course thinking of Bad Taste or Evil Dead in a way but with a more mysterious atmosphere like the ones you can find in old days Argento’s movies. I also adore other different great filmmakers like John Carpenter, Rob Zombie or also Robert Rodriguez.

EG: I didn’t know any of the actors in the first place, but they all, and especially Vasco Bailly Gentaud, did a really good job. How difficult was the filming especially for the children staying “paralyzed” during nearly the whole movie?

LM: Actually that part wasn’t difficult at all. Both the children already had shooting experience and were extremely patient. The difficult part was every gory scene that included Prune Richard (the little girl). It turned out she couldn’t stand the sight of blood. So we had to find a way to shoot every bloody effects without her in the room and clean everything before she could enter the set again. It was quite tricky and some scenes had to be rewritten. With Vasco it was a complete different story though. Despite his young age, he was very professional and more importantly he already loved horror movies. This was a great asset since he made the distinction between special effects and reality instantly and we had an amazing time shooting his horror sequences. He is a talented actor for his age and he exceeded all my expectations. I think he looks genuinely evil in those sequences.

EG: What can we expect from you and especially the Panic Attack (click me) Organization?

LM: We have a very short film about animal rights coming up. It’s something I feel very dedicated to and I’m anxious to do it right. I also really want to make a longer film. I like short films but I always feel frustrated in the end because I feel like I don’t have enough time to work on character development as I wish I could and I’d like to make stories more suspenseful with greater twists and turns. We first thought of a web-series and even wrote an entire script but we needed too much time and money so we had to postpone it for a while. Instead, I’m thinking of a short film trilogy, which could be a good alternative. We’d also like to organize a Horror Festival, but that’s just a project for now.

EG: How does it feel doing a trailer for the great David Cronenberg?

LM: It was really awesome. I mean it’s not as if he came directly to me and asked me for a trailer. I’m lucky enough to work for a French agency that makes all kind of international teasers and trailers named Sonia Tout Court. In this case it was one disturbing movie. But it was really interesting working on the promotion and there were enough twisted dialogues in it to do something fun.

EG: Thanks for the flick and the interview man. I wish you all the best for the future!
[youtube https://www.youtube.com/watch?v=ryx82Pq4n9I]