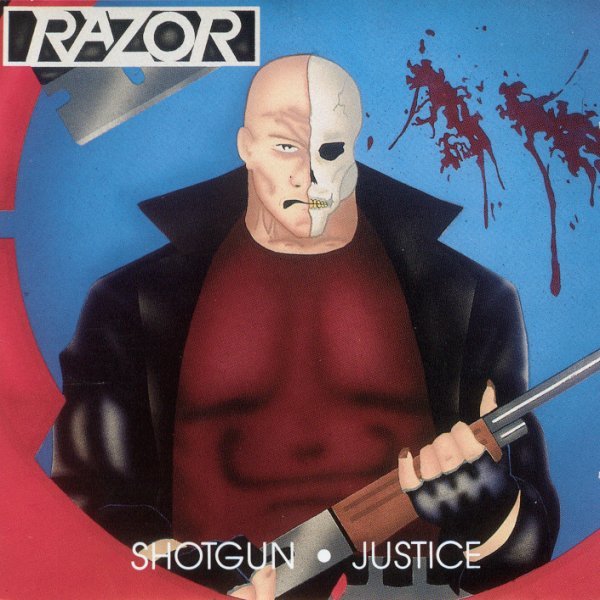 Easily one of the best thrash metal albums ever unleashed upon mankind. The sheer speed and hatred gives Reign in Blood a run for its money, but first things first….

When it comes to Razor you can do no wrong, pick whatever album you can find and your butt will be handed to you. Sadly half of their discography is impossible to find and cost me a fortune on eBay. Shotgun Justice was my introduction to the band and is my favorite. This is easily one of the most aggressive records ever, the lyrics might be tongue-in-cheek, but the band actually has the balls to address certain issues other bands would be scared to acknowledge. Stabbed in the Back instantly comes to mind, a song where the band calls out on all the sellouts and posers changing their sound to appeal to mainstream audiences.

Listen to Violence Condoned to get an idea on how the band was dealt with by promoters or how about American Luck showcasing how being Canadian penalized the band in more than one way?

Razor releasing an aggressive album did not come as a surprise, after all, all their albums are aggressive and fast, but the band was in turmoil. Label problems and the vocalist leaving along with the scene changing, not to mention the problems that being an underground band brings along, didn’t help matters. At a time when every band (minus Slayer) either broke up or changed its sound Razor come along with their fastest record ever.

So you have Razor more pissed off than ever dealing out, and that is a perfect starting point for a thrash metal record. Each riff sounds like a…well a razor shredding its way in one ear, out the other.

Bob Reid spits out the lyrics in a fitting manner while Rob Mills closes every gap with his drums.

Much like Slayer, Razor are punk gone metal, meaning they have the chops to actually sound menacing unlike most sloppy punk bands out there doing their bubblegum pop, but I digress…

Heck, even the linernotes are pissed off and full of warnings and threats. Every time I listen to the album I can’t help but grin like an undertaker, it just has all those elements that aggressive music needs to have and so many great moments, every song is awesome or just so freaking fast.

Brass Knuckles deserves a mention for the awesome break, before all hell breaks loose.

The Pugilist has just one of those riffs (that can be found allover the album) before the song ends in total chaos.

Miami has a weird title and even weirder lyrics. Totally hilarious and it just hands out riff after riff, at high velocity I might add.

The album is impossible to get on Cd, unless you wanna pay as much as I did, or you happen to come across one of the Russian bootlegs. However it has been re-released on vinyl, twice, in the last couple years. It seems as though the first vinyl re-release is hard to find (guess I was lucky) but the Highroller Records re-release is allover eBay, albeit with an ugly modified cover.

Let me finish this review with my favorite lyric

“All the bands I used to like are going down the drain
What the hell has happened here, have they gone insane?
I used to think that heavy bands ignored the current trends
But once you’ve been in Rolling Stone you learn about your friends”