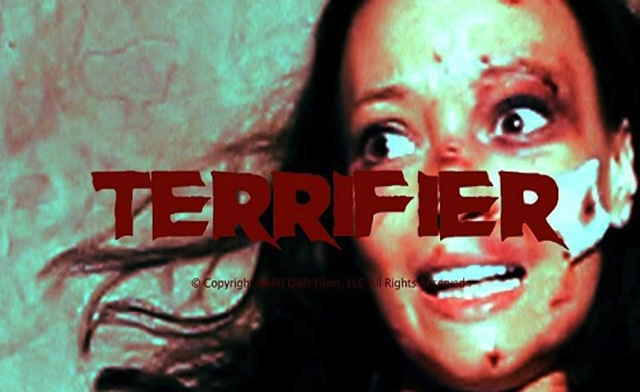 First things first. I do absolutely not recommend this movie to any people suffering from Coulrophobia, because TERRIFIER (2011) makes Stephen King‘s IT look like a pussy clown from your local hillbilly circus. When I stopped by this movie, I didn’t expect anything because I think that killer clowns are some kind of old-fashioned and not scary at all but as so often, I was completely wrong. Director Damien Leone (congratz on the last name) created a fantastic, horrifying and at the same moment brutal short film with a fresh story and a surprising twist at the end.

When it comes to modern grindhouse aesthetics I think that they are overused nowadays. Just because old-school, vintage stuff is quite popular right now, it doesn’t mean that they fit in every movie. With TERRIFIER it is quite different as the grain and washed out colours are not the key element of the movie but simply help to maintain the tense atmosphere. Also the quite decent actors, with especially Mike Giannelli delivering a fantastic job and the music, ranging from psycho circus to atmospheric to jack hammer drone music, help to complete Leone‘s idea of creating fear and simple gruesomeness.

To go even further, director Damien Leone has ingeniously combined elements of mainly 2 horror genres without drifting into standard cheesiness or exaggerated incredibleness. You immediately recognize that the slasher genre had a big influence on the director but he doesn’t stuck on stereotypes. There are no people running upstairs in order to escape and all the cars start up at first time. You may think that these are small and unimportant aspects but for me, it shows that Leone had a clear and modern vision without only using standardized elements.

TERRIFIER is close to perfection but there is this scene with the psychopathic clown driving a car and shooting a gun. At first I had my problems with the clown being too fast in chasing people (or in teleporting himself?) But when I look back I think that with the car chase scene and the use of a gun, the clown moves from a supernatural and mystic phenomenon to a „simple“ sicko with abnormal human behavior. This at the one hand makes the ending more logical and explicable but also less surprising.

In the end this doesn’t really matter and Leone shows us that short movies can work a lot better that over-length horror movies. TERRIFIER is an absolute must see for every horror fan. Believe me, you won’t be disappointed.