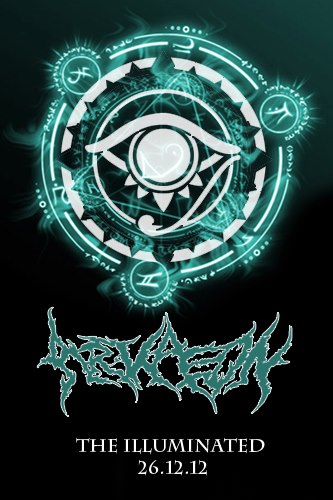 Arkaeon are a Luxembourgish technical death metal band that most people from the “scene” know. Recently we conducted an interview with their lead singer Rosh. Here’s the result! Enjoy!

El Gore: After the release of your EP New Level Of Inhumanity in 2011, 2012 marked a big year for Arkaeon. You played many shows with quite a few big names from the genre. How was that experience for you?
Arkaeon: 2012 has been amazing for us, we’ve had the chance to play with some of our favorite bands and at places that we didn’t imagine to play in that short time that our band existed. For us every show is something special, we don’t care if we play in front of 5 or 500 people, we always have our fun and we hope the people that watch us also enjoy it.

EG: I read on your Facebook profile that you are planning to release a new song around Christmas. Can you give us more information about that?
A: Yes, we will release a new promo song that is called The Illuminated on the 26th of December. This song will give our fans a little preview of our EP that we will record next year in March. The song is as you can already guess about the Illuminati cult, but it also has a more general sense, that people should not always believe what they hear and that they should believe in results and actions and less in talking and promises.

EG: The general consensus is that the EP was a very good start, what can we expect from Arkaeon in 2013 in terms of recordings?
A: Like I already mentioned before we will again record an EP in March 2013 at the Ear We Go Studios with our best man Doudin, this is the same studio where we recorded the New Level Of Inhumanity EP and where we are currently recording our promo song. Maybe we’ll go again intto the studio in late 2013, who knows…

EG: How about shows in 2013? Maybe Food For Your Senses again? Or maybe a tour?
A: We have a lot of shows already planned for next year in Luxembourg, Belgium, Germany, France and so on and we are also doing some tours in April and May 2013, in May we’re also going to the UK for the first time. We are more than excited for this, since it’s something that we always dreamed about. Food For Your Senses is definitely an option for us next year, even though I had my little accident last year, I am still a little unsure about this, but as long as there is no strobe, we will play every show we can! [laughs]

EG: You started a new band, Lifefight, not too long ago. Can you tell us a bit more about that project?
A: I always wanted to sing in a hardcore band since I’m into this music, but it was difficult to find other musicians that share the same interest, because hardcore wasn’t really big at all here; until a year ago the whole scene went more into hardcore and beatdown. So then Jones, Kai and I decided to start with Lifefight, we already have some songs written, which we will also record in early 2013. Then we will also start with some shows, but Arkaeon will always be the main band for us.

EG: I know you, Rosh, have mostly retired from organizing gigs but instead decided to do an annual concert. Can you give us any more information? A date or what to expect maybe?
A: Yes since the music business can really kick you in the ass financially I decided to stop organizing regularly shows here, but instead continue with one festival which I already did this year in Trier: the Bring Back The Passion Fest. The name is program, this festival is not there to make money, gain fame or whatever, it’s all about the music and the people. That’s why all the benefit of this show will go to a foundation that helps people that really need the money. Next year the Bring Back The Passion Fest will take place at the Kulturfabrik in Esch/Alzette on the 6th of July 2013. You can expect a mix of international and local hardcore and metal bands for a quite cheap price, more details will follow in the next weeks/months.

EG: By the way, what is the reasoning behind offering your EP completely free of charge? Because I think it’s a great idea for a new band.
A: We are not a band that cares about money, this doesn’t mean that we’re rich or whatever, this is not at all the case unfortunately [laughs], but for us it’s important that as many people as possible are able to hear our music and for free always sells better. We also play shows for a minimum wage, as long as we get a good show, we’re more than happy. So book us, we’re cheaper than a prostitute! [laughs]

EG: Last but not least, if you had to eat one dish for the rest of your life…what would it be?
A: That’s a really hard question, does Jack-Cola count as a meal?

EG: I lied. One more: anything you would like to add?
A: www.facebook.com/ARKAEONOFFICIAL
HAIL SATAN!
HAIL JACK DANIELS!
HAIL DEATH METAL!
HAIL ARKAEON!

We’d like to thank Rosh for taking the time to do this interview and we’re all looking forward to their new song and most of all the year 2013!