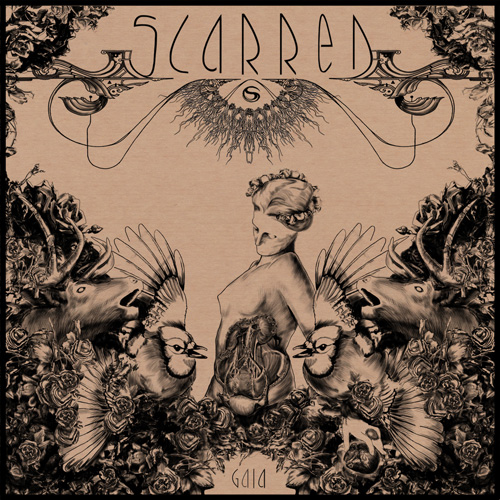 I am very stoked about today’s review, because I have the great privilege to give you an online world premiere of one of the, if not the, most anticipated Luxembourgish metal records in recent times. As you have guessed by the cover, I’m talking about Scarred‘s new album Gaia/Medea. Let me just spoil one thing before I begin: it was very much worth the four year wait! So let’s start, shall we?

First things first: it’s a very thematic album, with the first and the last song building the general concept, so you’ll be able to enjoy a steady progression throughout the ten songs. Without giving away too much, it deals with the end of the world in all of its forms. In comparison to the predecessor New Filth Order, the lyrics are a lot more mature and you can definitely notice a vast improvement.

The guitars are on a whole new level as well, both sound- and technique-wise. Whereas they were already super well executed on album number one, this one puts it all to shame. The amount of ingenuity of the riffs, licks and especially solos is just overwhelming and you will not believe your ears, especially on your first listen-through.

I could almost copy-paste the paragraph about the guitars when it comes to the drums, but that would be a bit boring. The drums are still as much “in your face” as you’re used to, with the addition of an uncountable amount of fills in the most unexpected passages. The sound fits the ensemble perfectly, yet manages to stand out among the sound barrage.

The vocals, which in my opinion were kind of monotonous on NFO, have reached new heights and display a great variation in tone, speed and feature harmonies almost throughout all of the songs…something I dig a lot, personally, since it adds a completely new dimension to these sixty-two minutes.

Next up is something I usually don’t do, but since this is one of my personal highlights this year, I will do a song-by-song breakdown of the album. Don’t worry, it won’t be too long!

The opener, Gaia, starts off with an atmospheric intro before unleashing hell on your eardrums. Coupled with a rather melodic chorus, it’s the perfect prelude to what awaits you.

Next up is Cinder, which I predict to be the new headbang anthem at upcoming Scarred shows. This groove-laden masterpiece features one of my favorite riffs on the entire album, as well as one of the sing-along-friendliest choruses you will find. The drums stand out as well, since they’re filled with nasty little fills left and right. Trust me when I tell you that you won’t be able to restrain yourself from bopping your head to this one.

The Great Pan(dem)ic starts in a rather progressive vain, proceeds to simply go balls to the walls with almost no chance for breath and finishes you off with a groove invasion.

The next song, Psychogenesis, is the first one to show a very different side of the record. Even though the following statement isn’t exactly correct, it feels to me like a black metal song in some spots, with the chorus describing that feeling the best.

Low is probably the most straight-forward song, and there’s not much I can say about it except that the last minute is purely eargasmic, definitely listen to that one carefully.

Mosaic is the guitar-geek song, no doubt about that one. Riff after riff, solo after solo, lick after lick…there’s no end to this one’s potential for bloody fingers of people who want to play along.

Next comes Idiosyncrasy, the metal-duet featuring Boerdi of Kraton and Dreadnought. The guy’s become such an omnipresent figure in the Luxembourgish metal scene that I would have almost been pissed if they got someone else instead of him. The song starts off with a really crushing riff, that is among the heaviest of the record, and transcends into a more progressive vibe about half-way through and ends with a fading-in intro of the next song.

Said intro is just too much for me to put into words. Essentially it’s nothing super complicated but the guitar (yes) tone they achieved here is just so uplifting and the perfect preface to easily my favorite song on the record: The Knot. I won’t go too much into this one since I want you to make up your own mind about it and tell me if you share my enthusiasm. If you don’t, then there’s at least the phenomenal guest-solo of Atilla Vörös, of Nevermore, for you to enjoy.

The ninth song, Empire Of Dirt, is also part of the straight-forward camp but it features a lot of groove in several parts as well as super-fast solos.

The final song, Medea, is almost twelve minutes in length…yet not boring. There’s so much variation, starting with an almost “happy” part then going into sheer heaviness before ending with an instrumental reprise of the first notes of the album. Also noteworthy: this one wins the lyric trophy for its purely epic story.

This sums up my review of Gaia/Medea, and to keep things short I’ll just say: if you don’t have this masterpiece on your shelf when it comes out…you’re missing out big time. In my opinion, the Luxembourgish quintet has managed to put every local metal record that has been released in the past decade to shame. …I might be exaggerating slightly, but decide for yourself once you’ve heard it. You can keep up with the band’s future plans on their Facebook page and listen to the exclusive new song below. And most of all: do not miss the release party of the album, which will happen on June 1st at the Kulturfabrik in Esch!