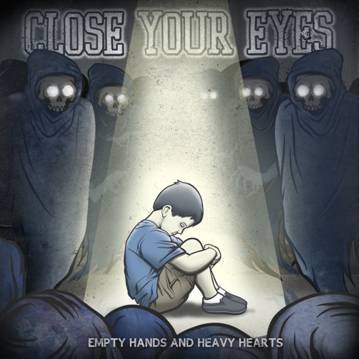 Today I want to do something slightly different by asking you a question: has it ever happened to you that you listened to a record when it first came out, dismissed it because you didn’t like it; then a couple of years later you randomly gave it another listen and you ended up loving it? Well that’s exactly what happened to me earlier this month with Close Your Eyes‘ Empty Hands And Heavy Hearts from 2011!

Their music is a very melodic type of hardcore with some small hints of pop-punk, which were more pre-dominant on the predecessor We Will Overcome. The instrumental department leaves nothing to wish for, especially the drums were the thing that sucked me back in when I re-listened to the twelve songs. The melodic guitar-work rounds the whole package off nicely, but the major (re-)selling point for me is…in the next paragraph.

If you’ve read one or two reviews of mine you know that I generally pay attention to the lyrics in music and, more often than not, find similarities between the words and my own life. And even though the band is of Christian belief, which I am not, I managed to identify with a lot of their songs’ meanings. The fact that their singer’s voice is highly enjoyable obviously makes it even easier to like.

To sum things up: this review isn’t really about the record itself but rather me telling you that sometimes it’s worth giving something you dismissed at first another chance. So go through your music collection and give that one album you never really got into another go…you might experience the same thing I did. For more info, you can find the band on Facebook and listen to their song below.