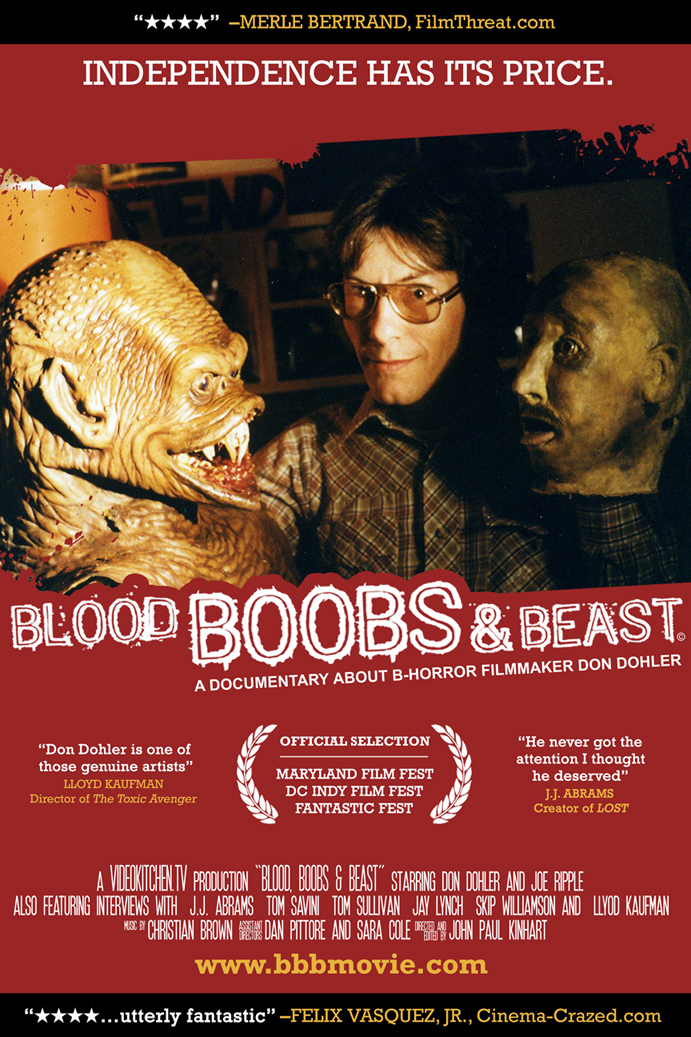 For many of us, it takes a hard slap in the face to wake up from our state of complacency and acknowledge that we’re not living life as fully as we could. Life gave it to Don Dohler in form of a shotgun pointed at his head on his 30th birthday. He was sitting at his desk at his office job that he had worked for years, thinking it would be just another day filled with routine – instead, he gained a new outlook on life and the incentive to make a serious attempt at realising his dreams. Following his near-death experience, the mellow Baltimore native decided to make his first feature length film, and not too long after he’d managed to acquire enough money from local investors, the sci-fi/horror B-movie that would later become a staple of late night TV called The Alien Factor saw the light of day.

Blood, Boobs & Beast is an affectionate portrait of Dohler directed by John Paul Kinhart, showing interview and on-set footage that was filmed over the course of about 2 years. Dohler, who, in spite of the mixed reviews he received, got all of his films distributed internationally and even made it on national TV working on a shoestring budget, inspired a range of artists and filmmakers after him. He had garnered a cult following of devoted fans over the years, two of which were interviewed for the documentary. But despite all of his underground popularity, Dohler couldn’t have been further from the rockstar aesthetic or aura: the conservative, timid man sporting the classic side part and whose all-time favourite movie was West Side Story seemed just like one of the neighbourhood dads you see waiting in line every day to pick up their kids from school. Peculiarly enough, his endearing average Joe-ness might have been exactly what made him fascinating.

“Independent film is not only an oxymoron; it doesn’t exist anymore.” – Martha Plimpton

Ever since I can remember I’ve felt that I am different from most of the people who surround me, especially when it comes to art: music, film and literature. During the pre-Internet times (yes, there was such a time) I often felt misunderstood and alienated because a lot of people, family members and friends thought that “being different” was some kind of destructive rebellion phase with the motive of hating everything ”normal” and being attracted to the “abnormal”. This felt strange because I am not the kind of person who hates stuff. In my opinion, you have to have loved or at least had a connection with something/someone in order to feel hate or anger. I just do not care about a lot of things and normality most of the time doesn’t appeal to me. This indifference isn’t based on intolerance of trivial entertainment but simply reflects my dissatisfaction towards socially standardized and corrupted mainstream art.

As a child and later on in my teenage years, I became interested in writing scripts and even did some filming with my dad’s camera, but in the end I was already too influenced by mainstream media and instead of doing my thing I quit because my definition of cinema stood in complete contrast to the mainstream productions. At that age, I simply couldn’t imagine that there were people who were fascinated by (creating) no-budget films.

In the mid/late 1990s, a young man called Robert Rodriguez wrote a book called Rebel without a Crew: Or How a 23-Year-Old filmmaker With $7,000 Became a Hollywood Player. He describes his own remarkable story, the unique and original strategies/techniques he used to make his low-budget debut El Mariachi.

After I read this book I realized that quitting the writing and filming was one of the worst decisions I had ever made. So I began to read even more, watched genre movies, documentaries, how-to videos and I even started writing again. Having done so for over 10 years now doesn’t make me a semi-professional writer or director but what I realized is that there isn’t a need to become one as long as I am happy with what I do.

And that’s exactly what Blood, Boobs & Beast tries to show. The movie doesn’t try to convert anyone, because if you aren’t a fan of cult B or C cinema already, you won’t become one after you have seen BBB, neither is it an instruction guide to not giving a fuck about people who make films for profit. Personally, I think the documentary is full of pieces of wisdom and delivers a perfect insight into the life of a man who thinks differently and for whom filmmaking does not necessarily correlate with the idea of making money.

“A determined soul will do more with a rusty monkey wrench than a loafer will accomplish with all the tools in a machine shop.” – Robert Hughes

I have been a fan of DIY (crust) punk and oldschool Black Metal for years. I am not particularly interested in the topics those genres often deal with but what I can say is that I have a passion for dedicated and honest people who try to remain true to themselves and their values, and the same goes for movies. In fact, DIY music and cinema are not an excuse for lack of talent and money but rather a way of life and an innovative form of expression. With Blood, Boobs & Beast, Kinhart draws a prime example of an indie back-garden movie maker who didn’t like Hollywood and returned to where he belongs in order to make his own stuff. Another fascinating aspect of the documentary is the director’s ability to put the viewer in the time, place and context in which Dohler’s films were made.

Beside this passion, ebullience and idealism there is something else which makes me feel comfortable in this wonderful world of creative underground horror: the social cohesion which instantly creates a familial atmosphere. After having watched the documentary for the 3rd time now, I still feel like I am part of the Dohler family. Something deep within me tells me that I have known this man for years even though I never got the chance to meet him.

If this documentary has a message it is the following one: if you are interested in doing movies, grab a camera and get started but do it with heart and be ambitious because in the end there will always be people who respect you for what you do. Be an inspiration to people like the younger me.

You couldn’t be more wrong.

Unlike Luc, I don’t consider myself a film geek or connoisseur by any means and I never caught the filmmaking bug, but the story and career of Don Dohler inspired me all the same. Here we have someone who worked on basically nothing (The Alien Factor was partly shot in his family’s backyard and featured several family members in the cast, for instance) and still achieved great things with passion and a creative, supportive entourage. When he grew weary of the “BBB” formula and the increasingly exploitative nature of the films he created with his business partner Joe Ripple, instead of lingering on and continuing to do work that he couldn’t support with conviction anymore, he was honest enough to step away from film for a while and focus on things that were more important to him.

Beyond the central theme of filmmaking on the cheap, Blood, Boobs & Beast made me think about what it means to publicly scrutinise the product that emerges from the process. Personally, I do reviews because I like writing, but I wouldn’t say that I am passionate about the reviewing aspect of it. The idea of being downright passionate about judging things as opposed to creating them seems sad to me, for one, and there are instances when it leaves a bitter taste in my mouth because I am perplexed by how vitriolic and contemptuous I can get when I write about art that I detest and that represents values I disagree with. On one side, this seems inevitable. In order to successfully take on the role of a critic, it is crucial for me to speak from a place of unabashed honesty, and if I happen to loathe the subject with every fibre of my being, then so be it. The other and slightly disturbing side of the story, however, is that I am attacking something that doesn’t actively hurt anybody in a lot of cases and that a second person with differing life experiences might very well consider a masterpiece.

I think it’s important to keep in mind that at the end of the day, nobody goes into making a film with the ulterior motive of releasing a piece of shit. They might take the simple route by going for cheap shock value or applying lazy, age-old guidelines and clichés (Cracked’s Trailer For Every Oscar-Winning Movie Ever comes to mind), but there invariably is some degree of work involved – more work than it takes to write 600 words on why the result sucks. Criticising art and analysing it from many different perspectives is necessary, being biting is fine, but it should always be done with an undercurrent of compassion and respect for the creators’ efforts. There are times when I feel personally insulted by an exceedingly bad movie experience – I feel robbed of my time and money and condescended to – and when I review said movies shortly after and those feelings are still fresh, my disdain and frustration show through much more vehemently than they would if I took counsel with my pillow and wrote about them the next day. It is true that there are horrible films out there that deserve the scathing reviews they get, but even behind perceived cinematic bowel movements, there were people who sat down at one point, thought about the concept extensively and jumped through all the hoops required to create and finally sell their product. Chances are that much blood, sweat and tears went into a movie the audiences deem complete and utter trash, and even though that doesn’t make it any better on a technical level or less problematic in its treatment of a topic, I find that it creates a foundation of respect for those who made it, which makes a considerable difference in the way we speak and think of something.

Blood, Boobs & Beast served as a gentle reminder of this fact by humanising and shedding light on the creative process of a filmmaker whose low-budget works polarised the critics and some of which I would admittedly be quick to dismiss if I hadn’t seen this documentary prior, and that is perhaps the most important insight I, as someone who occasionally reviews other people’s art, was able to take away from it. The goal is not to butter anyone up or assign them an A for effort when we perceive their work to be mediocre at best and ludicrous at worst. On the contrary. Reviewers should strive to be honest over anything else, but that by no means excludes treating the makers and their creation with dignity – firmly, sure, but with dignity – because the ultimate truth is that we’re dealing with people who had the courage to bring something to the world that wasn’t there before.

A big thank you to Troma Entertainment, the distributor of Blood, Boobs & Beast, which uploaded the full-length documentary on their YouTube channel. This film is a must-see not only for fans of the genre.