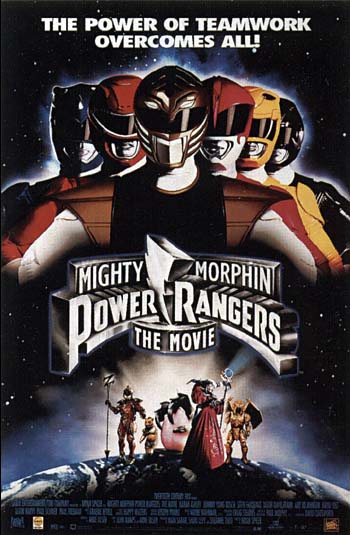 Ladies and Gentlemen, we have a new winner in the category “most annoying masked men/women in media ever.” With the release (and hype) of Daft Punk’s disco record Random Access Memories I thought that nobody could threaten their leading position but I was wrong. A few days ago I saw a retro (coincidence?) film which hid in a dusty, dark corner for nearly 2 decades just to ambush and slay me with its power. Sorry disco dudes, this stuff hit me deadly and I have no other choice but to call my decision off.

The new winner is Mighty Morphin Power Rangers: The Movie from 1995 and a “we had no idea what we were doing” life-time award goes to director Bryan Spicer and his wonderful writers Arne Olsen/John Kamps. I am aware of the 90s children super-hero movies being mostly a clever move in order to sell even more of the shitty franchise products. Children are great customers and you should try to keep them at it but this film is a farce and I feel personally affronted by this incredible masterpiece of crap.

If you decide to create a super-hero group franchise for children with the goal to con money out of the parents all over the world, you have to follow a few important rules. The most important one is that every single child should have the possibility to identify with one of the heroes. Write and develop at least 4 different characters: the geek, the clown, the introverted and the extroverted. If you want to increase the degree of difficulty and prejudices you can play with colours and gender in order to make the whole show more “realistic”. Secondly, you should place value on the fact that even though everybody is a respected and important individual, the heroes gain even more power by teaming up. When everybody has their part to play, the circle of friends unfolds its great magical power and the impossible can be achieved. To conclude, you have to include some “monsters”, preferably some silly but mean adults, do product placement of the products you have available in your shop and want to sell, pick some awesome costumes and weapons, make everything look cool and advertise like there is no tomorrow.

Mighty Morphin Power Rangers: The Movie tries to follow these “instructions” but as everybody involved in this movie is a terrible miscast and unable to fulfill his job, the result is absolutely disastrous. I would never let my children watch a film like that. Not because of moral or ethical reasons but because it is completely absurd, extraneous and dumb.

Watching a super-hero movie for children with the kids is like going to the local Mc Donalds. It is not the healthiest thing but there is nothing wrong with it as long as you take their education seriously. Watching Power Rangers with children, however, is like getting them an empty happy meal bag from which the toy is missing.